Aaron Rodgers completed 31 of 50 for 233 yards and a touchdown, but his 35th birthday was to end in disappointment as Crosby hooked his 49-yard attempt wide as time expired.

Zane Gonzalez had put the Arizona Cardinals 20-17 ahead with 1:41 left to play and the loss meant Green Bay have a 4-7-1 record for the season leading to the departure of McCarthy, head coach since 2006 and Super Bowl winner in 2010.

The Los Angeles Rams clinched the NFC West title for the second season in a row, with Todd Gurley rushing for 132 yards and two scores in a 30-16 win over the Detroit Lions.

A three-point game going into the fourth quarter, Gurley (below) sealed the win after muscling his way into the end zone with two minutes left on the clock. 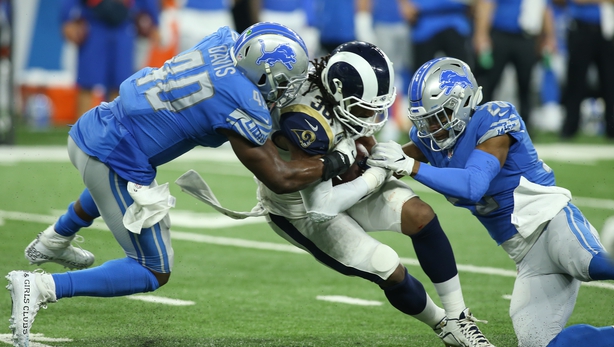 Patrick Mahomes threw four touchdowns as the Kansas City Chiefs saw off the Oakland Raiders 40-33, and Josh Allen had two scores and rushed for 135 yards but the Buffalo Bills went down to divisional rivals Miami Dolphins 21-17.

Another AFC East side, the New York Jets, capitulated in Nashville, leading 16-0 but going down 26-22 to the Tennessee Titans to record their sixth loss in a row.

The Jets had a pick-six, blocked a punt and a point after attempt but their defence crumbled in the fourth quarter with Marcus Mariota finding Corey Davis for the game-winning touchdown with 36 seconds left.

Overtime was needed in New Jersey as the New York Giants blew a 10-point lead late in the fourth but won 30-27 over the Chicago Bears with an Aldrick Rosas 44-yard field goal.

The Jacksonville Jaguars restricted the Indianapolis Colts to 265 yards in a shutout 6-0 win, while the Houston Texans D-Line forced four turnovers from the Cleveland Browns in their 29-13 victory.

Cam Newton threw for two touchdowns and 300 yards, but was picked off four times as the Carolina Panthers went down 24-17 to the Tampa Bay Buccaneers, while Tom Brady passed 1,000 career rushing yards in his 19th season as the New England Patriots beat the Minnesota Vikings 24-10.

The Seattle Seahawks saw off the fading San Francisco 49ers 43-16, the Atlanta Falcons lost their fourth in a row 26-16 to the Baltimore Ravens and Denver Broncos kept up their purple patch with a 24-10 win over the Cincinnati Bengals, Phillip Lindsay rushing for two touchdowns.