Russell Wilson threw three touchdown passes as the Oakland Raiders endured another miserable outing at Wembley following a 27-3 defeat to the Seattle Seahawks.

Four years ago, Oakland head coach Dennis Allen was fired following a one-sided loss to the Miami Dolphins in the English capital, and their latest visit proved just as humbling.

All eyes were on Marshawn Lynch in his first game against Seattle since reversing his retirement decision last year to represent his hometown team Oakland.

Lynch was a key component of the Seahawks' Super Bowl-winning team in 2014 but he was on the margins against his former employers, contributing just 45 rushing yards in 13 carries. 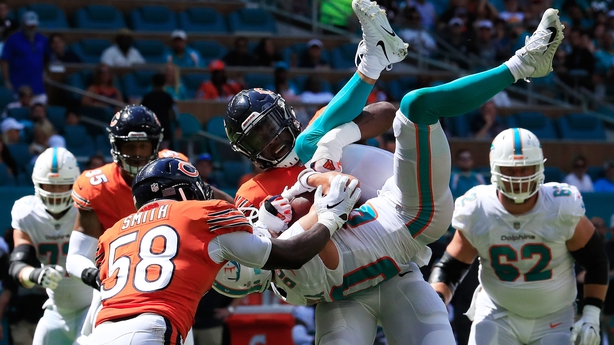 The Chicago Bears squandered an 11-point advantage against Miami, who clinched a 31-28 victory courtesy of Jason Sanders' 47-yard field goal in the final moments of overtime.

Cody Parkey had earlier been awry with his kick from six yards further away but Sanders made no mistake as Chicago's three-game winning streak came to an end.

Jason Myers set a New York Jets record for successful field goal attempts as his side overcame the Indianapolis Colts 42-34.

Myers split the posts on seven occasions while Sam Darnold threw two touchdown passes to usher the Jets to victory, with the Colts slipping to their fourth successive loss.

Antonio Brown ran in for a 31-yard touchdown in the final few seconds that sealed a 28-21 victory for Pittsburgh over Cincinnati, the Steelers' eighth win in a row over the Bengals.

The Atlanta Falcons snapped a three-game losing streak as Matt Ryan's 354 yards and three touchdowns saw them edge out the Tampa Bay Buccaneers 34-29.

The Washington Redskins pipped the Carolina Panthers 23-17, the Houston Texans defeated the Buffalo Bills 20-13 and the Minnesota Vikings overcame the Arizona Cardinals 27-17.

In the later games, the Los Angeles Rams beat the Denver Cowboys 23-20 after Todd Gurley rushed for a career-best 208 yards and two touchdowns, while Dak Prescott claimed a personal-best 82 yards in the Dallas Cowboys' 40-7 win over the Jacksonville Jaguars.

He did it again.

Previously 5-0, the Kansas City Chiefs lost for the first time this season after being downed 43-40 by the defending AFC champions New England Patriots.

Rob Gronkowski caught a pass from Tom Brady in the dying minutes, seeing off Ron Parker to pick up 42 yards, before Stephen Gostkowski finished the drive with a 50-yard field goal.

Meanwhile, the Baltimore Ravens picked up a franchise-record 11 sacks to shut out the Tennessee Titans 21-0.