Patrick Mahomes and the Kansas City Chiefs improved to 5-0 with a 30-14 victory against the Jacksonville Jaguars.

In a game between the top-scoring offence and top-scoring defence, the Chiefs produced another scintillating display to retain the only 100 per cent record in the AFC.

Mahomes had his first interception of the season, but still threw for 313 yards and rushed for a touchdown of his own.

The Chiefs raced into a 23-0 lead before Jaguars quarterback Blake Bortles overcame a terrible first half to throw for one touchdown and rush for another, but Kansas City had long done enough to secure another win.

Joining the Chiefs on 5-0 are the Los Angeles Rams.

A cat-and-mouse game at CenturyLink Field saw the lead change five times with neither side ever leading by more than seven points.

David Moore had two TD receptions in the third quarter - one for 30 yards - as the Seahawks took a 31-24 lead into the last 15 minutes.

Todd Gurley II scored early for the Rams on a five-yard rush but Cairo Santos missed the extra point.

Fortunately, he was true with the boot on a 39-yard field goal attempt with 6:09 left in the game and the Rams defence held strong for the win.

The Cincinnati Bengals improved to 4-1 with a come-from-behind victory over the Miami Dolphins.

Miami, who also came into the game with a 3-1 record, led 17-0 in the third quarter, but the Bengals scored 27 unanswered points - 24 in the fourth quarter - to take victory.

The Baltimore Ravens could not keep pace with the Bengals at the top of the AFC North as they were beaten by divisional rivals the Cleveland Browns in overtime. 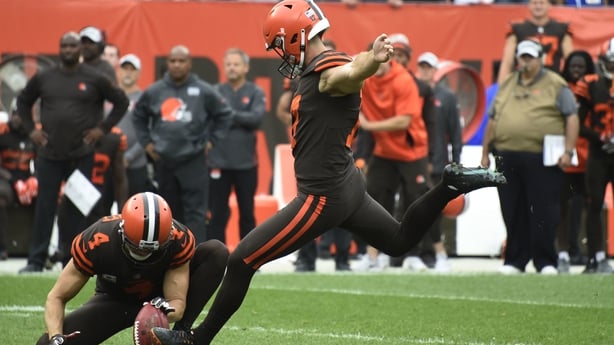 Cleveland kicker Greg Joseph missed a 55-yard field goal at the end of regulation, but took his second match-winning opportunity as he sunk an effort from 37 yards to secure the Browns their second victory of the season.

Ben Roethlisberger threw for 250 yards and three touchdowns, two to Antonio Brown, while James Conner rushed for another two scores to leave the Falcons 1-4 in a season the Super Bowl will be played in their stadium.

Graham Gano landed a 63-yard field goal with the last kick to secure the Carolina Panthers a thrilling two-point victory over the New York Giants.

The Giants took the lead late on through Saquon Barkley's second touchdown of the game - the first coming from a 57-yard throw from the unlikely source of wide receiver Odell Beckham Jr.

Panthers quarterback Cam Newton could not lead his team into comfortable range for a field goal, but it did not matter for Gano who found the target with his long-range effort to improve the hosts to 3-1.

It was a happier day for the other team in New York as the Jets' rookie quarterback Sam Darnold threw for three touchdowns to end his side's three-match losing run with a 34-16 victory against the Denver Broncos.

In the other early games on Sunday, Stephen Hauschka scored a last-second field goal to give the Buffalo Bills a 13-12 win against the Tennessee Titans, while Green Bay kicker Mason Crosby missed five of his six attempts as the Packers were beaten 31-23 by the Detroit Lions.

Elsewhere, the Dallas Cowboys were sunk by their state rivals the Houston Texans 19-16 in overtime, the Los Angeles Chargers dished out the Oakland Raiders' fourth defeat of the season 26-10, the Minnesota Vikings beat the reigning Super Bowl Champions the Philadelphia Eagles 23-21 and the Arizona Cardinals improved to 1-4 with a 28-18 win over the San Francisco 49ers.