The Buffalo Bills saw off a late charge from the Miami Dolphins to book their place in the play-offs for the first time since 1999.

Buffalo's 22-16 victory against their AFC East rivals would not have been enough for the New York state side to break their drought - but they got help from the Cincinnati Bengals who beat the Baltimore Ravens.

Tyrod Taylor threw for 204 yards and created the opening touchdown with a 26-yard pass to Nick O'Leary in the first quarter. A pair of field goals and a rushing touchdown then had the Bills 19-0 up in the third.

But the Dolphins rallied with two touchdowns in the final quarter - one on the ground and one in the air - as they finished the season 6-10.

The Bengals edged a tight encounter with the Ravens, with Andy Dalton finding Tyler Boyd with a 49-yard pass with 44 seconds left on the clock to give them a 31-27 win and push the Ravens out of the post-season.

The Tennessee Titans also clinched a play-off spot as they saw off the Jacksonville Jaguars 15-10, while the Cleveland Browns went 0-16 for the season after losing 28-24 to the Pittsburgh Steelers.

Matthew Stafford finished with 323 yards and three touchdowns as the Detroit Lions saw off the Green Bay Packers 35-11, while the Indianapolis Colts put 15 points on the board in the second half as they beat the Houston Texans 22-13. The Colts subsequently fired coach Chuck Pagano moments after they closed their 4-12 season.

The Minnesota Vikings continued their strong form with a 23-10 win over the Chicago Bears, while the New England Patriots clinched top seed with a 26-6 win over the New York Jets.

Kirk Cousins threw three interceptions as the Washington Redskins lost to the New York Giants 18-10, the Dallas Cowboys beat the Philadelphia Eagles 6-0 and the Atlanta Falcons saw off the Carolina Panthers 22-10.

There were wins too for the Kansas City Chiefs, 27-24 against the Denver Broncos, the San Francisco 49ers beat the LA Rams 34-13 and the LA Chargers had a 30-10 win against the Oakland Raiders.

The Arizona Cardinals beat the Seattle Seahawks 26-24 and the Tampa Bay Buccaneers saw off the New Orleans Saints 31-24. 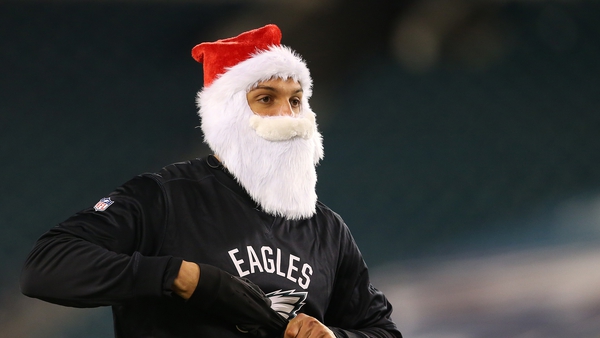 Festive joy for Steelers and Eagles in NFL