The New England Patriots inched closer to securing the AFC East championship after beating the Buffalo Bills 23-3 on Sunday to extend their winning run to eight games.

Running back Rex Burkhead scored a pair of touchdowns after Stephen Gostkowski's three field goals had given New England the half-time lead.

Tom Brady completed 21 of 30 passes for 258 yards, while Rob Gronkowski starred in the second half as the Patriots won their 14th successive road game.

The Minnesota Vikings also claimed their eighth win in a row, with Case Keenum throwing two touchdown passes in their 14-9 win over the Atlanta Falcons.

Calais Campbell made history as the Jacksonville Jaguars beat the Indianapolis Colts 30-10, becoming the franchise's single-season sack leader after taking his total to 12.5 in the first quarter.

The Miami Dolphins ended their five-game losing run with a 35-9 victory over the Denver Broncos, condemning their visitors to an eighth straight loss.

The Tennessee Titans remain at the top of the AFC South after beating the Houston Texans 24-13.

Josh McCown starred as the New York Jets beat the Kansas City Chiefs 38-31 in an exciting encounter, completing 26 of 36 passes for 331 yards and a touchdown.

Robbie Gould returned to haunt his former team as he scored every point for the San Francisco 49ers in their 15-14 win over the Chicago Bears, including a last-gasp field goal.

The Green Bay Packers beat the Tampa Bay Buccaneers 26-20 thanks to Aaron Jones' touchdown run in overtime, while Joe Flacco threw two touchdown passes in the Baltimore Ravens' 44-20 win over the Detroit Lions. 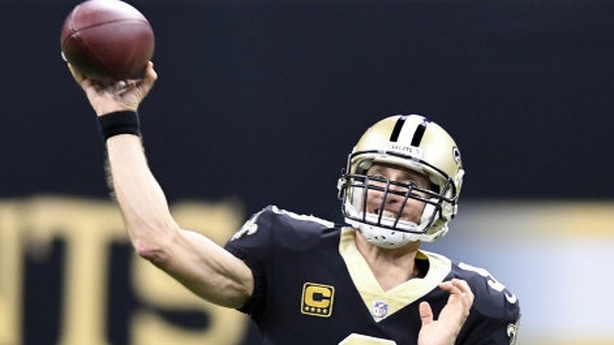 Drew Brees passed for 269 yards and a touchdown as the New Orleans Saints beat the Carolina Panthers 31-21 at the Mercedes-Benz Superdome.

The Saints punched in three touchdowns in the first half, with Alvin Kamara and Mark Ingram finding the endzone on the ground and Michael Thomas connecting with Brees for a 10-yard touchdown. Cam Newton completed 17 out of 27 passes for 183 yards and two touchdowns.

The Cleveland Browns lost their 12th game in a row, going down 19-10 to the Los Angeles Chargers with Philip Rivers passing for 344 yards and a touchdown as LA moved to 6-6 and tied for first place in the AFC West.

The Oakland Raiders hit 14 points in the fourth quarter as they beat the New York Giants 24-17, while the Los Angeles Rams scored 16 in the first quarter and did not look back as they beat the Arizona Cardinals 32-16.