United States president Donald Trump was met with defiance across the Atlantic on Sunday as NFL players knelt for the American anthem prior to the Jacksonville Jaguars' emphatic 44-7 Wembley victory against Baltimore Ravens.

Two days after Trump insisted team owners should sack those who opt to protest during the Star-Spangled Banner, more than a dozen players from the Jags and Ravens took a knee as the anthem played in London.

Jaguars and Fulham owner Shad Khan, who donated $1m to Trump's presidential inauguration, was among the others who stood and linked arms on the sidelines before a contest which Jacksonville comfortably won.

It was their third successive victory at a venue they have been playing in annually for five straight years, and a surprising one given Baltimore, for whom Londoner Jermaine Eluemunor made his debut, had arrived in the capital as favourites.

The Jaguars have now won as many games in London as they have in Jacksonville since October 2015. 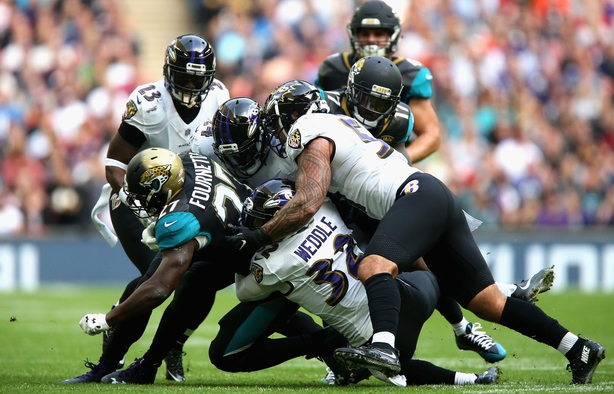 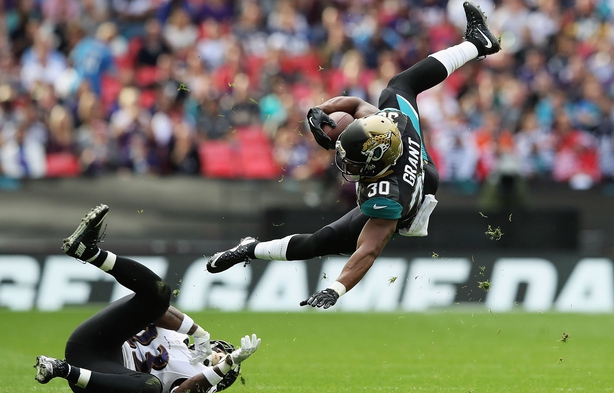 Earlier in the morning the president had continued his tirade against the NFL on Twitter commenting on attendances and ratings being "WAY DOWN", but 84,592 were at Wembley, a new record since games were first hosted in England a decade ago.

They were then treated to the second most one-sided affair in that 18-game history.

Tight end Lewis hauled in three of Jags quarterback Blake Bortles' four touchdowns - the other being tossed to Allen Hurns, while rookie running back Leonard Fournette provided another score on the ground.

The Ravens did not get on the board until the final four minutes of the contest, by which point starting QB Joe Flacco had been replaced by back-up Ryan Mallett on a nightmare day.

It left a sour taste for Eluemunor on his return back home. The 22-year-old was born less than 10 miles away from Wembley in Chalk Farm and had been inspired to take up the game after watching the first International Series game on television in 2007.

Instead it was Jags head coach Doug Marrone who experienced a happy homecoming of sorts. He used to play in this venue for the now-defunct World League of American Football's London Monarchs. 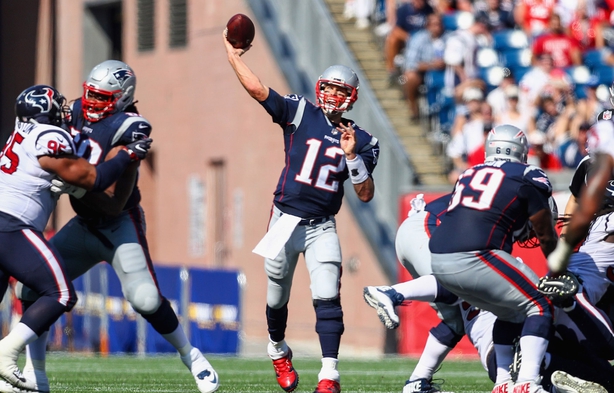 Super Bowl champions the New England Patriots avoided a second defeat of the season in dramatic fashion with a last-gasp 36-33 victory over the Houston Texans.

Trailing 33-28 with 30 seconds remaining, quarterback Tom Brady found Brandin Cooks in the end zone for the wide receiver's second touchdown of the game.

The Atlanta Falcons, who squandered a 28-3 lead against the Patriots in Super Bowl LI in February, maintained their 100% start to the season with a hard-fought 30-26 win over the previously unbeaten Detroit Lions. 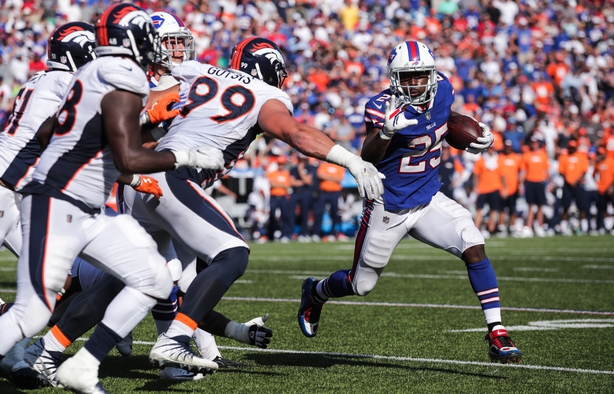 The Denver Broncos surrendered their 100% record as they lost 26-16 on the road to the Buffalo Bills, while the Pittsburgh Steelers also suffered their first loss of the season against the Chicago Bears.

Jordan Howard ran in the winning touchdown from 19 yards in overtime.

The New York Giants and Philadelphia Eagles were also heading to overtime until Jake Elliott kicked a 61-yard field goal as the clock expired to give the Eagles a 27-24 win, with Eli Manning's three touchdown passes in the fourth quarter proving in vain.

In Minnesota, Case Keenum produced a brilliant display in place of the injured Sam Bradford, passing for three touchdowns and a career-high 369 yards without a turnover to guide the Vikings to a 34-17 victory over the Tampa Bay Buccaneers.

And it was also a tale of two quarterbacks in Carolina, where Cam Newton threw three interceptions and Drew Brees for three touchdowns as the New Orleans Saints cruised to a 34-13 win over the Panthers.

In a battle between two teams without a win, the Indianapolis Colts held off a late fightback from the Cleveland Browns to win 31-28, while the New York Jets also got off the mark with a 20-6 home win over the Miami Dolphins.