The Pittsburgh Steelers clinched their NFL play-off place with a last-gasp win over the Baltimore Ravens on Christmas Day- but reigning champions the Denver Broncos were dumped out and embarrassed by the Kansas City Chiefs.

Antonio Brown's touchdown with nine seconds remaining earned the Steelers a 31-27 win and with it the AFC North title as they rallied from 17-10 down to eliminate their fierce rivals from play-off contention.

Le'Veon Bell ran for one touchdown and caught a Ben Roethlisberger pass for another, but full-back Kyle Juszczyk looked like being the unlikely Baltimore hero as his superb 10-yard touchdown run put them 27-24 up with a minute and 25 seconds to play.

Roethlisberger, though, drove the Steelers downfield and hit Brown, who was held up short of the line by two defenders but showed great awareness to reach the ball out into the end zone.

In the later game, the Broncos needed to win to keep alive their hopes of beating the Miami Dolphins to a play-off place but suffered an ignominious end to a 33-10 loss. 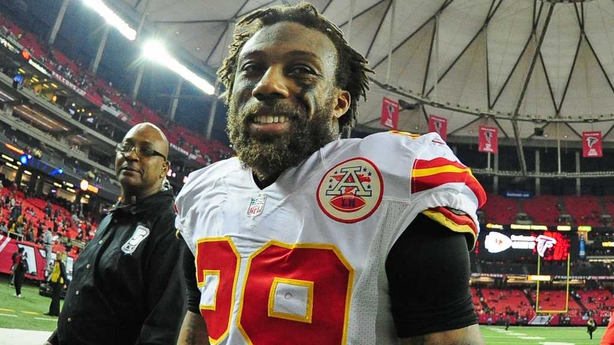 Running touchdowns from Alex Smith and Tyreek Hill and a receiving score for Travis Kelce had put the Chiefs in control even before they gave their fans a Christmas gift by lining up 25-stone nose tackle Dontari Poe as a running back - and then stunningly calling a trick play for him to lob a touchdown pass to Demetrius Harris.

Chiefs safety Eric Berry [above], who spent Christmas 2014 receiving chemotherapy for Hodgkin's lymphoma, fittingly wrapped up the game with an interception.

The Chiefs, Steelers, Dolphins, New England Patriots, Oakland Raiders and Houston Texans will contest the AFC play-offs, with only seedings to play for in week 17 - when the Chiefs have the chance to beat the Raiders to the AFC West title and second seed.