The New York Giants claimed their first 10-win season since 2010 and kept alive their slim hopes of a division title with a 17-6 victory over the Detroit Lions.

Eli Manning completed 20 of 28 passes for 201 yards, and Odell Beckham Jr. made a one-handed touchdown catch late in the fourth quarter as the Giants won for the eighth time in nine games.

The Lions, now 9-5, still top the NFC North with two games to play, but their lead is down to one game after victory for the Green Bay Packers.

Aaron Rodgers picked out Jordy Nelson with a 60-yard pass to set up Mason Crosby's late 32-yard field goal to give the Packers a 30-27 victory over the Chicago Bears.

Ty Montgomery ran for a career-high 162 yards and two touchdowns, and the Packers earned their fourth straight victory, despite blowing a 17-point lead in the fourth quarter.

Andrew Luck threw for 250 yards and two touchdowns as the Indianapolis Colts bulldozed the Minnesota Vikings 34-6.

Robert Turbin rushed for two touchdowns, while Frank Gore rushed for 101 yards to help the Colts to a fourth win on the road to continue their play-off push.

Jacksonville Jaguars announced they had fired head coach Gus Bradley after their 21-20 loss to the Houston Texans, while the Buffalo Bills kept their play-off hopes alive with a 33-13 victory over the Cleveland Browns.

Elsewhere, the Tennessee Titans won 19-17 at the Kansas City Chiefs, the Baltimore Ravens beat the Philadelphia Eagles 27-26 and the Cincinnati Bengals lost 24-20 to the Pittsburgh Steelers. 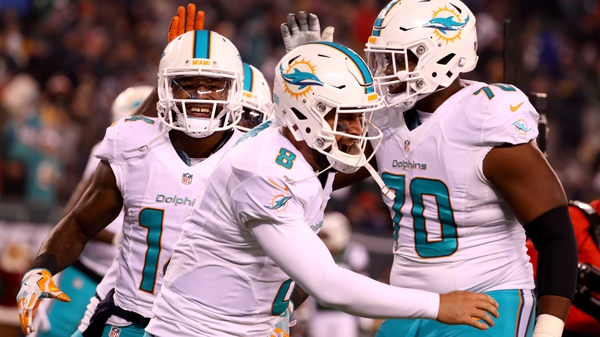