Veteran Denver Broncos quarterback Peyton Manning had his side's devastating pass rush to thank for delivering a second championship ring as the Broncos inflicted a 24-10 defeat on the Carolina Panthers at Super Bowl 50 in what was potentially his swansong appearance.

Manning, 39, played a mere supporting role in Denver's victory over the Carolina Panthers at Levi's Stadium as Von Miller and his defensive colleagues harassed recently-crowned MVP Cam Newton throughout in Santa Clara.

Denver forced four turnovers from the Panthers' offence and Ron Rivera's side produced a glut of mistakes, including a missed field goal from Scottish-born kicker Graham Gano, to suffer just their second defeat of the season.

It meant Manning won the Super Bowl for the second time in his 18-year career, even though he threw for only 141 yards and no touchdowns, and it gave him possibly a fitting note to finish on if he decides to retire.

Gano got his wish to kick the game off after the Panthers won and elected to defer, allowing Manning to lead a 64-yard, 10-play drive that culminated in a Brandon McManus field goal as the Broncos drew first blood.

Newton, crowned the league's MVP 24 hours earlier, went three and out at the controls of the Panthers offence and Denver's swarming defence soon increased their advantage.

Miller, who was drafted directly after number-one overall pick Newton in 2011, got to the quarterback and dislodged the ball and it trickled into the Carolina end zone where Malik Jackson jumped on it for a defensive touchdown that made it 10-0 to Denver.

Newton finally got rolling, in part thanks to his ability to make plays with his legs, and running back Jonathan Stewart leapt over from one yard out for the NFC champions' first points of the game early in the second quarter. 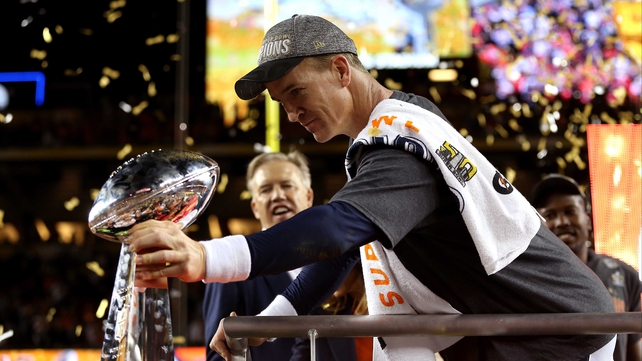 This was an error-strewn contest, though, epitomised by the Panthers' special teams unit failing to recognise Jordan Norwood had not called for a fair-catch en route to a Super Bowl-record 61-yard punt return which resulted in another McManus field goal.

That score, which made it 13-7, was the final one of the half as both sides committed turnovers prior to the interval, Denver's an ugly Manning interception straight at defensive lineman Kony Ealy.

Coldplay, Bruno Mars and Beyonce came and went during the half-time show, yet the Panthers could still not exit their rut when they returned as Gano missed a 44-yard field goal when the ball struck the right upright.

Another three-pointer from McManus padded Denver's lead, though Carolina soon found themselves back in Broncos territory thanks to a sensational snatch from the unheralded Corey Brown.

However, once again the Panthers failed to capitalise as Ted Ginn let a straight-forward catch slip through his hands and into safety TJ Ward's grasp - although even that turnover was not straight forward as Danny Trevathan had to recover his team-mate's fumble.

Manning coughed the ball up again - to a fumble caused by the brilliant Ealy - and Gano this time split the posts from 39 yards to bring the Panthers within one score with a little over 10 minutes left.

The Broncos kept it conservative on offence and relied on their terrific defence, who once again came up the big play - Miller strip-sacking Newton once more, with Ward on hand to recover in the red zone.

From there, CJ Anderson scored his team's first offensive touchdown with a two-yard run and Manning completed a two-point conversion to Bennie Fowler to leave Carolina and Newton too much to do late on.