Cam Newton and the top-seeded Carolina Panthers repelled a spirited second-half surge by their nemesis team, the Seattle Seahawks, for a 31-24 victory on Sunday to reach their first NFC championship since the 2005 season.

Carolina appeared to have the game sewn up after they came out firing with two touchdowns a little over three minutes into the contest en route to a commanding 31-0 halftime lead.

But Seattle, the two-time defending NFC champions who beat Carolina at this stage last year, got to within seven points with about a minute to play after Steven Hauschka followed three Russell Wilson touchdown passes with a field goal.

The ensuing onside kick attempt by Seattle was recovered by Carolina and the Panthers were then able to run out the clock.

"Man, it was really excruciating to watch," Newton said about the final minutes of the game. "It was a tale of two halves and we've got to be better than that."

With the win, Carolina will host the second seed Arizona Cardinals next Sunday to determine which team represents the National Football Conference at the Super Bowl on 7 February.

Newton, the league's leading MVP candidate after tossing 35 touchdowns and running for 10 more in Carolina's NFL-best 15-1 regular season, completed 16-of-22 passes for 161 yards and a touchdown in Sunday's game in Charlotte.

Asked about Carolina's failure to score in the second half, Newton said: "Well, we were conservative but at the end of the day, you've got to trust the coaching. We had a great plan coming in and we've just got to keep putting it back together."

Wilson, his opposite number, threw for 366 yards and three touchdowns to offset two interceptions as Seattle shut out the Panthers after half time.

Jonathan Stewart, who scored two touchdowns in the first half to help Carolina take control, became the first 100-yard rusher (with 106) allowed by the Seahawks in 27 games on his return from a foot injury.

The other Panthers touchdowns came from linebacker Luke Kuechly, with a 14-yard interception return, and tight end Greg Olsen, on a 19-yard pass from Newton.

With one win standing between the Panthers and their first Super Bowl appearance since the 2003 NFL season, head coach Ron Rivera was not about to lose sleep over his team's inability to add to their lead in the second half.

"We won the football game, and that's the bottom line," said Rivera. "I'm very proud of what we did in the first half. If we could have just skipped right on over at halftime and just kept playing, I think we might have been in much better shape."

"But kudos to (the Seahawks) because of what happened. That's why they are a championship calibre football team because they have that kind of ability (to come back)." 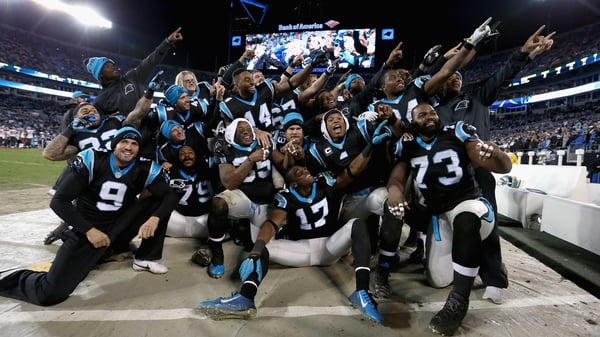