The unbeaten Carolina Panthers secured the NFC South title and the New England Patriots ensured a return to the play-offs in Sunday's NFL action.

But there was a blow for the Cincinnati Bengals as quarterback Andy Dalton suffered a broken thumb.

The Panthers went to 13-0 as they outclassed the Atlanta Falcons to win 38-0 and secure a first-round bye in the play-offs.

Jonathan Stewart ran in a one-yard score before Cam Newton threw touchdowns of 74 and 46 yards to Ted Ginn Jr and a four-yard strike to tight end Ed Dickson in the first half.

Two turnovers in the third quarter set up a Graham Gano field goal and a Fozzy Whittaker touchdown and Carolina were able to rest several starters, with Derek Anderson taking over from Newton late in the third.

Tom Brady threw touchdowns to Keshawn Martin and the fit-again Rob Gronkowski to help the Patriots to a 14-point lead against the Houston Texans before their defence took over, led by Jabaal Sheard.

Another sack, the first of Akiem Hicks' two, sent ex-Patriot Hoyer to the locker room for concussion tests as New England wrapped up a 27-6 win.

The Pittsburgh Steelers won a bad-tempered AFC North clash with Cincinnati 33-20 to close the gap on the divisional leaders to two games.

Several players from both teams had taken part in a bout of pushing and shoving before the game even started but when it came down to the real on-field action it was the Steelers who had the edge.

Dalton's injury led to fears over the Bengals' chances should they make the play-offs and though untried replacement AJ McCarron showed some promise, he threw two interceptions - one returned for a touchdown by William Gay - and DeAngelo Williams ran for two more Pittsburgh scores.

The victory took coach Mike Tomlin to 90 career wins with the Steelers, a mark he joins Chuck Noll and Bill Cowher on at the franchise. 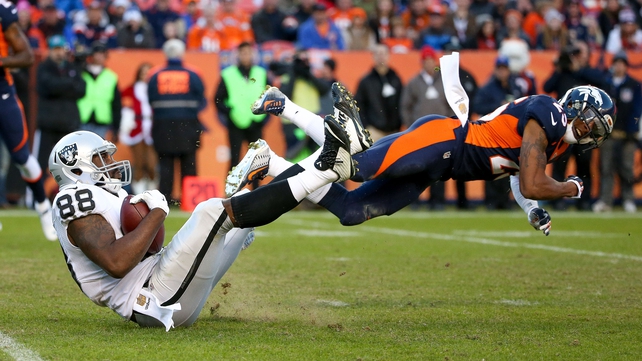 AFC West leaders the Denver Broncos failed to score a touchdown as they went down 15-12 to divisional rivals the Oakland Raiders.

The Jacksonville Jaguars were emphatic 51-16 victors against the Indianapolis Colts while the Seattle Seahawks came out 35-6 winners over the Baltimore Ravens as Russell Wilson threw for five touchdowns, including three to Doug Baldwin who has eight in his last three games.

The New Orleans Saints ended their four-game losing streak as quarterback Drew Brees went to 421 career touchdown passes - passing Dan Marino for third in NFL history - in a 24-17 win over the the Tampa Bay Buccaneers at the Raymond James Stadium.

The recalled Johnny Manziel led the Cleveland Browns to a 24-10 win over the San Francisco 49ers, who prop up the NFC West after the St Louis Rams won 21-14 against the Detroit Lions.

The Green Bay Packers eased to a 28-7 win over the Dallas Cowboys on the back of 230 yards rushing, including touchdowns for both James Starks and Eddie Lacy. There were also receiving scores for Starks and Richard Rodgers.

The Philadelphia Eagles picked up a second successive win, 23-20 against the Buffalo Bills and their outspoken ex-Eagles running back LeSean McCoy.

The Packers' NFC North rivals the Chicago Bears lost 24-21 to the Washington Redskins while the New York Jets beat the Tennessee Titans 30-8 - Tennessee's points coming on a 41-yard touchdown pass from running back Antonio Andrews to quarterback Marcus Mariota out of the wildcat.