Brock Osweiler made a winning start in relief of Peyton Manning as the Denver Broncos moved to an 8-2 win-loss record and resumed their path towards the NFL play-offs.

Osweiler, on his 25th birthday, made his first career start having replaced the NFL's all-time passing yards leader during last week's loss to the Kansas City Chiefs.

That was Manning and Denver's second straight loss but they disposed of the Chicago Bears 17-15 as Osweiler threw touchdowns to Demaryius Thomas and Cody Latimer and the hosts failed on a late two-point conversion attempt.

Osweiler's mother and father were in the crowd at Soldier Field and he said: "My parents are the two most supportive parents in the world, my brother was here as well, my wife was here - it's a very special family day.

"I don't think it was anything about proving [myself], it's just a team victory. The defence played lights out. It's been a long process. I haven't wasted a single day when I've been sitting behind Peyton; I've been learning from things on and off the field."

Denver's AFC West rivals the Oakland Raiders faltered against the Detroit Lions' improved defence, Detroit wrapping up an 18-13 win with quarterback Matt Stafford's touchdown run followed by a safety after Oakland's Donald Penn was penalised in the end zone. 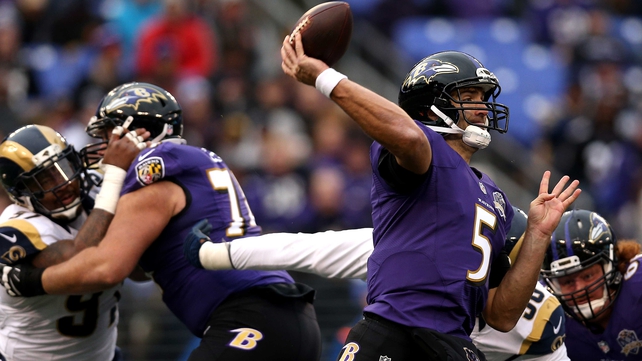 The Baltimore Ravens beat the St Louis Rams 16-13 but it came at a cost as they lost quarterback Joe Flacco for the year.

Kicker Justin Tucker missed twice from 51 yards but hit a game-winning field goal from 47 - but coach John Harbaugh revealed after the match: "Joe Flacco just had a season-ending knee injury. He tore at least his ACL (anterior cruciate ligament), I think his MCL (medial cruciate ligament) as well."

The NFC South showed its mettle, led by the Carolina Panthers who extended their perfect record to a 10th game with a 44-16 hammering of the Washington Redskins.

Cam Newton slung a career-best five touchdown passes, a tally matched by Jameis Winston who in the process equalled an NFL rookie record in the Tampa Bay Buccaneers' 45-17 win over the Philadelphia Eagles.

The Atlanta Falcons, though, went down 24-21 to the Indianapolis Colts, whose win was sealed when tight end Coby Fleener stepped in on defence to intercept Matt Ryan's last-ditch Hail Mary.

Tony Romo returned from injury to lead the Dallas Cowboys over the Miami Dolphins, 24-14, throwing touchdowns to Terrance Williams and Dez Bryant and at one stage completing a pass left-handed. The Houston Texans beat the New York Jets 24-17. 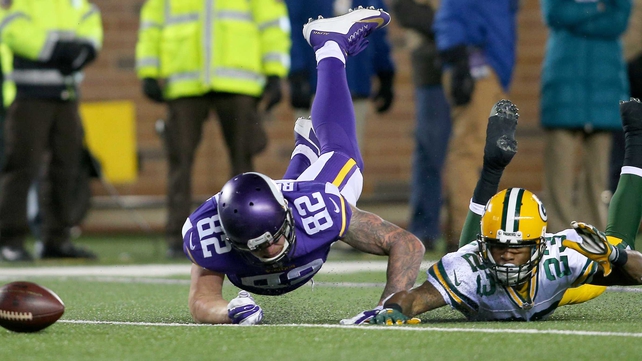 The Green Bay Packers snapped a three-game losing streak with a convincing 30-13 victory over the Minnesota Vikings - Aaron Rodgers threw for 212 yards and a pair of touchdowns as the Packers climbed above their opponents to the top of NFC North.

Kansas City's 346-pound defensive lineman Dontari Poe was sent in at full-back for a one-yard touchdown run, the first of his career, in the match against San Diego - which finished in a 33-3 success for the Chiefs.

Rookie Thomas Rawls rushed for 209 yards and had two total touchdowns for the Seattle Seahawks, who got back to 5-5 in NFL West with a 29-13 win over the San Francisco 49ers, while the Arizona Cardinals saw off the Cincinnati Bengals 34-31 in Sunday's late match. 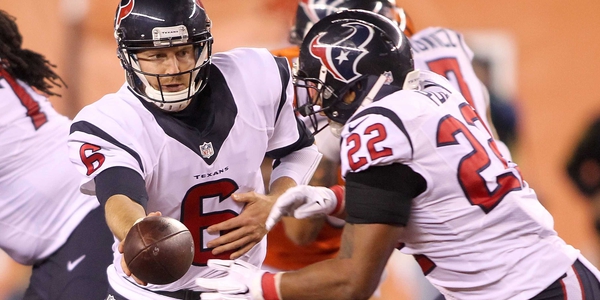