The Seattle Seahawks gave an early indication of how tough it will be to replace them as Super Bowl champions with a dominant 36-16 win over the Green Bay Packers as the new NFL season kicked off last night.

A suffocating defence, methodical offence and an electrifying home crowd was once again the winning formula for the Seahawks.

"We don't change for anybody. (The Packers are) a dynamic offence but it says a lot about us that we could shut them down," Seahawks safety Earl Thomas told reporters.

After crushing the Denver Broncos 43-8 to win the Super Bowl in February, the Seahawks are vying to become the first back-to-back champions since New England in the 2003 and 2004 seasons.

The Packers took a 7-3 lead through the first quarter, but Seattle's Wilson tossed a 33-yard touchdown to Ricardo Lockette in the second to move ahead.

Seattle's Lynch scored his first touchdown to give the hosts a 17-10 lead at halftime before the Seahawks added a field goal and a safety in the third quarter to go up 22-10.

Lynch's second score of the night made it 29-10 early in the fourth.

Rodgers threw a three-yard touchdown to Randall Cobb to give the Packers a sniff at a comeback, but Wilson answered with a drive of his own and tossed a 15-yard score to Derrick Coleman to complete the scoring at 36-16.

Rodgers, one of the top quarterbacks in the NFL, was held to just 189 yards passing with one touchdown and one interception.

"They are the Seattle Seahawks - they're a great defence," said Rodgers, who missed seven games last season because of a collarbone injury.

"We didn't expect to convert every drive but we have to put more points on the board."

Rubbing salt in the Packers' wounds, second-year running back Eddie Lacy left in the fourth quarter with a possible concussion.

The last time Green Bay visited Seattle in 2012 they lost on a last-second touchdown after a controversial call by replacement officials.

This time around they never looked like taking it down to the wire.

The Seahawks have now won 16 of the last 17 games at their boisterous CenturyLink Field. 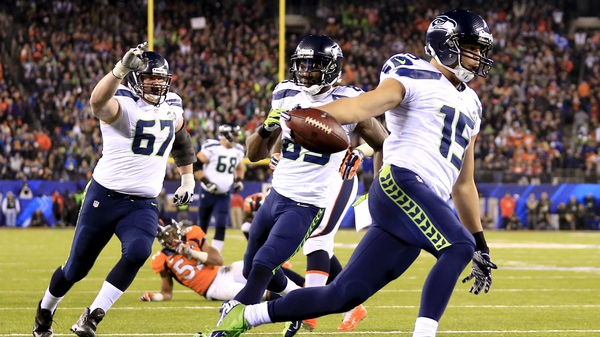