Frisch shone on his first BKT United Rugby Championship start against Connacht, his handling and offloading skills igniting a Munster attack that has faltered for large chunks of this season.

The 26-year-old was dogged by injuries after joining from Bristol in the summer but made an instant impact as Munster boosted their top-eight hopes with a bonus-point win over the Westerners.

Frisch's performance against Connacht was in stark contrast to ex-All Black Fekitoa, who has disappointed since arriving at Thomond Park.

"Frisch is going to be a key player for them," former Ireland hooker Jackman told Against The Head. "Good things happen when he’s on the ball.

"He gets Munster into that 15-metre channel which is something the Fekitoa-[Dan] Goggin partnership didn’t do.

"He is a talented footballer, he just looks really comfortable. I know Conor McPhillips had him in Bristol last year. He’s qualified for France, England and Ireland - Fabien Galthié wanted him to go away with France to Japan [last July].

"He could be a guy that comes in under the radar and has a bigger influence than Fekitoa or De Allende had.

"The way Mike Prendergast wants to play and the way Munster are going to evolve, I think he could be a key man. We're only seeing him now because he had some niggles early on in a red shirt."

'Ulster can lay down a marker at RDS'

The top two sides in the URC do battle at the RDS on Saturday as Leinster face Ulster in their fourth interprovincial derby of the season.

Leo Cullen’s side defeated Ulster 20-13 in Belfast on 30 September and have also beaten Connacht and Munster as part of an eight-game winning run.

Ulster, however, have responded positively since that loss to Leinster and travel to Dublin buoyed by a four-game winning run.

"It's a great opportunity for Ulster to lay down a marker."

Bernard Jackman and Murray Kinsella look ahead to Saturday’s top of the table clash between Leinster and Ulster. #RTERugby #AgainstTheHead #URC pic.twitter.com/fOFgjgWJFu

"Leinster went up to Ravenhill earlier in the year and in horrible conditions Ulster couldn’t play their attacking game and lost that power battle," said Jackman.

"The weather is not supposed to be great [in Dublin] this Saturday but it’s a great opportunity for Ulster to lay down a marker.

"We expect them to win at Ravenhill most weeks in the URC, they’re a very good side, but this is going to be a good test for them."

With the Heineken Champions Cup around the corner, Jackman expects both teams to approach the game with full-throttle Test intensity.

"I think they have to because it has come after the international period," he said.

"Even though Leinster had more players away, this is a great opportunity to get that cohesion, to get a good hit-out and see where you are, and be ready to go for round one of the Champions Cup." 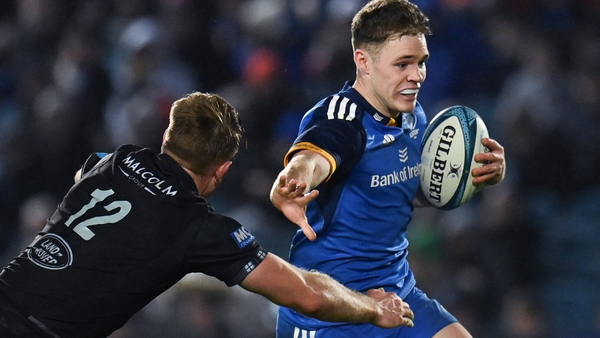 URC team of the week: Irish provinces back with a bang