While this season has been one of frustration so far for Munster, it's personally been one to remember for Diarmuid Barron.

The Tipperary hooker established himself as a regular in the province's matchday squads last season, and has continued that upward trajectory since September.

The 24-year-old has three starts among five appearances for the province this season, and appears to be putting real pressure on Niall Scannell for a starting place in the Munster front row.

Away from the province, he's also being noticed. His five games for Munster this season would likely be seven or eight had he not been brought on the Emerging Ireland tour of South Africa earlier in the campaign, and he made enough of an impression on that trip to be brought into the Ireland A squad this month, featuring for them in their defeat to an All Blacks XV at the RDS.

Even in recent weeks, he played a major part in Munster's 28-14 win against a South Africa Select XV at Páirc Uí Chaoimh, scoring their third try just before half-time [pictured below]. 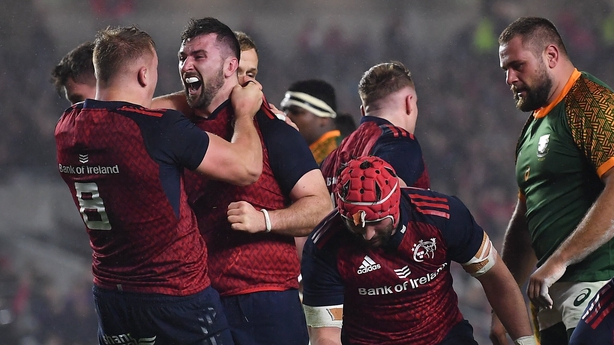 The hooker has had to be patient for his chance with Munster - 27 of his 40 appearances for them have come since September 2021 - but says the experiences of the last two months have been worth the wait.

"It's been great, when you're a little bit younger, maybe 21 or 22, you're looking forward to times like this when you're sitting on the sideline waiting for a chance, and waiting for opportunity," he said.

"Having those opportunities was class. It was enjoyable too. The Emerging Ireland tour was excellent, I got a lot out of it, and then back to play the Bulls and it was a really enjoyable night in Thomond Park.

"We had a couple of close defeats to Leinster and Ulster, but we'd encouraging performances. After that it was the 'A' game. The result spoke for itself there, it was disappointing in a lot of aspects, but a big thing for me and my family as well, and something I'm proud of.

"Then, playing South Africa, you could see for yourself how special that was for the fans, province and players alike."

Following Tipperary's football and hurling sides, Barron says he'd had some good and bad days at the Páirc prior to their recent win against the South Africans.

Gaelic football was originally the big sport in the Barron house, with his father Kevin playing senior football for the county in the 1980s.

And following in his father's footsteps was in the plan during Diarmuid's early teens, before rugby took over at Rockwell College.

Last year, the Munster man admitted to looking on with a degree of envy at his former Ireland U-20 teammates Rónan Kelleher and Dan Sheehan in the Ireland senior team, but after his recent experiences in both the Emerging Ireland, and Ireland camps, he says it's given players like him an important pathway towards stepping up to the senior team someday. 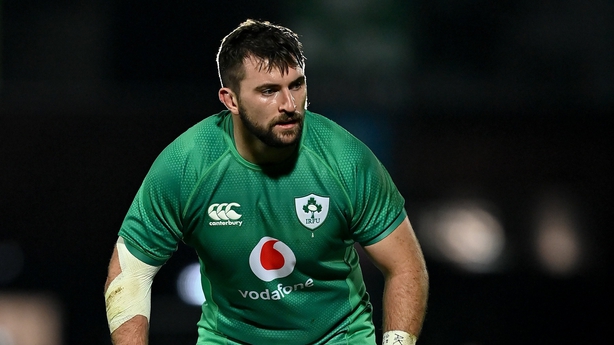 "Definitely, and also getting used to what they're doing with the national team, and if you are selected at some stage, it gives you a better chance of slotting in seamlessly.

"If that day comes, it's a good dress-rehearsal in a way, and it was really enjoyable.

"I took a large amount of confidence from it. We're playing a bit more similarly here [Munster] now to the way Ireland are trying to play as well, and it was interesting to hear the coaches' opinions on the way we do things, and personally how I do things. Just sitting down with them, learning from them and taking everything I could from it."

As impressive as Munster were in their win against the South Africans in Cork two weeks ago, it will count for little unless they can use it as a springboard for the rest of the season.

After five defeats from their opening seven games, the province find themselves 14th in the table. But with just five points separating them from sixth place Cardiff, Graham Rowntree's side know they can quickly move up the table with a couple of big wins.

"It starts with this week," Barron added, looking towards this Saturday's visit of Connacht to Thomond Park.

"This week we have a huge challenge, and we are not shying away from that. But all we can do is look after ourselves and keep growing on our performances, take momentum from, I suppose, a couple of good performances recently, and try and do the best we can and then look to build that momentum even more so.

"In terms of derbies you are going to have to fight fire with fire and if you take a backward step it's going to be a long night for you, isn’t it?

"We are under no illusion about the challenge which is coming and what we have to bring to match it and push past it. You are going to have to bring everything you have got and especially be at the right pitch physically and then the mental side of it, hopefully, looks after itself."