A model of consistency for both Leinster and Ireland, Van der Flier became the third Irishman to be named World Rugby Men's Player of the Year, beating 2018 winner Johnny Sexton, Antoine Dupont and Lukhanyo Am to claim the top men’s prize in Monaco.

The openside starred in Ireland’s historic series win in New Zealand and replicated that form this month against South Africa and Australia as Ireland completed a clean sweep of autumn victories.

"He is the most humble fella, I’m chuffed to bits for him," said Leinster assistant coach McBryde.

"It’s thoroughly deserved as well. He is one of the most consistent performers week in, week out, very reliable, does his homework, his diligence off the field is second to none.

"What makes him the player that he is? He has got several aspects to his game. With ball in hand he has got the ability to break tackles.

"He is very dynamic, he really carries the ball hard and runs good angles. He has got great distribution from lineouts as well when he is acting as an extra forward coming in to get the ball away.

"Defensively he is very accurate and a very good tackler. He makes good decisions in and around the ruck, when to compete and when not to. A good communicator as well, and he keeps working at his game.

"He is a great role model for the youngsters with regards to somebody who consistently works on his game, constantly looks at how he can improve in different areas. Consistency is one of the main things.

"I can’t remember him having a bad game. He is always on top of his game. He knows his role inside out, does his homework and that just pays dividends on the field. It’s a testament to him and well deserved."

One of the other standout performers during Ireland's Bank of Ireland Nations Series was Van der Flier’s Leinster team-mate Jimmy O’Brien.

Having seamlessly slotted in at outside centre on debut against South Africa, O’Brien also impressed at full-back and wing in the wins over Fiji and Australia.

McBryde believes the 25-year-old’s versatility could work in his favour when Andy Farrell sits down to select his squad for next year’s Rugby World Cup.

"He’s very accurate in what he does," said McBryde. "He was fully deserving of his opportunity and he has taken it.

"There’s a World Cup around the corner as well so there’s no better time to stake a claim for your shirt."

After three successive weeks for the national side, the provinces are preparing to return to action in the BKT United Rugby Championship with leaders Leinster tackling Glasgow Warriors at the RDS on Saturday, live on RTÉ1 and RTÉ Player.

It marks the start of a busy period for Leinster, with a host of interpros and Champions Cup games following this weekend’s match, and McBryde said they must hit the ground running.

"This block is crucial," he said. "We’re entering into a new competition, as well as interpro rivalry. It’s all to play for.

"We can’t afford to be looking any further than the next game. Glasgow will want to come and prove a point after last season. They’ve got a new coach, they’re going to be pretty dangerous. We’re going to have to be at our best."

Harry Byrne, Ryan Baird and Rónan Kelleher could all return from injury against Glasgow after taking a full part in training on Monday. 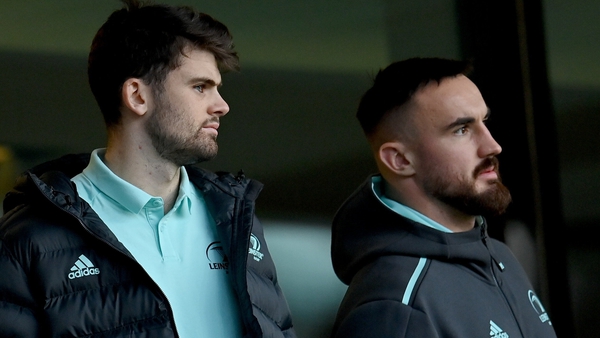