Ulster inflicted further misery on Munster as they withstood a second-half fightback to win at Thomond Park for the first time since 2014.

The visitors led 15-3 at the interval courtesy of tries from Jordi Murphy, Tom Stewart and the returning James Hume, having played with a strong wind advantage.

However, Ulster left a number of other opportunities behind them while Nathan Doak failed to convert any of the three tries, and they failed to register another point as Munster launched a gutsy second-half comeback.

"I think Ulster will be massively frustrated coming away from here"

Out-half Jack Crowley punished Ulster indiscipline with two penalties and Shane Daly made it a one-point game on 66 minutes when he crossed in the corner while Cormac Izuchukwu was in the sin bin.

Ulster wilted as the game wore on yet still turned down shots at goal as they chased a try bonus point. It almost proved costly but a big turnover by Duane Vermeulen ended Munster's hopes of a morale-boosting win heading into the international break.

It was Munster's third interprovincial defeat in four weeks and leaves them 14th in the BKT United Rugby Championship table, while Ulster moved above the DHL Stormers into second spot with their fifth win from six games.

There were question marks over Ulster after the sickness that swept through the squad in South Africa, and they were forced into a late change when Sean Reffell was injured during the warm-up.

Murphy took his place in the back row and made an almost immediate impact with the opening try. Stewart found Sam Carter from a five-metre lineout and Ulster mauled their way over, with Murphy touching down at the back.

Doak failed to convert and Crowley replied with a penalty after Vermeulen was penalised for reacting badly to Diarmuid Barron's clear-out at a ruck, but Munster failed to kick on and the concession of two quick-fire penalties was punished by the visitors.

Again, Ulster’s driving lineout did the damage. Munster attempted to push the visitors into touch but they regrouped and a second drive resulted in Stewart crossing in the corner.

Munster had chances to respond but regular visits to the Ulster 22 went unrewarded. Crowley was growing in influence and lovely hands from Mike Haley and Patrick Campbell allowed Fekitoa to release Shane Daly down the right wing, but the centre then flew off his feet when trying to clear a ruck and was penalised.

Worse was to come for the former All Black after David McCann had a try chalked off by the TMO for a knock-on by Doak at a ruck. The TMO again intervened to flag a high tackle by Fekitoa on McCann, the centre fortunate to only see yellow.

Ulster quickly capitalised on their numerical advantage, and again it came off a lineout. Stewart was tackled inches from the line before Billy Burns flung the ball wide to Hume, who brushed off Crowley and Campbell to score on his return from injury.

Doak missed his third conversion attempt of the evening and given the strength of the wind on their backs, Ulster would have been unsatisfied to only lead by 12 at the interval.

British and Irish Lions prop Rory Sutherland was introduced for his Ulster debut as the second half got underway while Doak and Luke Marshall departed, the latter limping off with an apparent leg injury.

Sutherland made an instant impact with some soft hands and a breakdown turnover, but a wayward lineout handed the ball back to Munster and Ulster compounded that error by losing their discipline.

Crowley turned two of those penalties into points to make it 15-9 after 54 minutes and their comebook hopes were further boosted when Ulster forward Cormac Izuchukwu was yellow-carded for preventing a quick tap penalty within minutes of his introduction.

Simon Zebo’s impact was more positive. Having received a big ovation on his return from injury, he then created Munster’s sole try by floating a pass over Stewart Moore to put Daly over in the corner.

Crowley was unable to kick his side in front, his conversion attempt coming back off the post.

Munster stopped Ulster from mauling their way over the line during a tense finish but they were unable to create a late scoring chance of their own.

A half-break by Fekitoa in the final minute gave them hope but Vermeulen stopped them in their tracks with a big breakdown penalty. 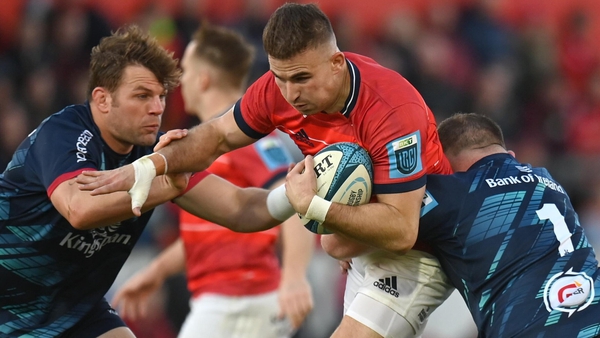