On 45 minutes, the Munster miracle looked on.

As Gavin Coombes sent his cousin Liam over in the corner for the opening Munster try, and the Joey Carbery conversion pushed them 13-7 in front, the 44,000-plus crowd at the Aviva Stadium were getting a game they probably hadn't bargained for.

When the teams were announced at 12pm on Friday, the sight of Johnny Sexton, Tadhg Furlong, Caelan Doris, Garry Ringrose and co looked a level above Munster's, in large part down to a lengthy injury list which claimed Tadhg Beirne and Peter O’Mahony in the last week.

And even with Furlong forced to withdraw before kickoff due to an ankle knock, it seemed more likely than not that Leinster would extend their winning run in the BKT United Rugby Championship.

In the end, the international experience Leo Cullen’s side could draw on ultimately counted, as they secured a bonus-point 27-13 win, but while they produced four well-worked tries, particularly their final effort from Rob Russell, they looked well off their best.

They hit back from that 13-7 deficit almost instantly with a Dan Sheehan try, moving 22-13 in front after a Luke McGrath score just after the hour mark, and it was enough to see them through for a sixth win from six.

For Munster, it’s a fourth defeat from six games, but they will take plenty of positives.

By the time Coombes ran in that first try, they’d taken everything Leinster had to throw at them, enduring two yellow cards – for Keynan Knox and Jean Kleyn – in the process.

They survived plenty of close calls in the opening half, with Leinster’s inaccuracy costing them throughout the first 40, often times down to rugged, scrappy Munster defending.

Even as the game appeared to be getting away from them, Munster were relentless, the injuries piling up as the second half ran on.

Jeremy Loughman swapped back and forth between tight and loosehead, Diarmuid Barron played a full 80 minutes at hooker, replacement hooker Scott Buckley filled in at back row for the final 15 minutes, while Ruadhan Quinn played a quarter of an hour, five days on from his 19th birthday.

When the sides met here back in May, it took Leinster just one minute to cross for their first try, and they nearly repeated the trick this evening, but Jason Jenkins was held up over the line after a quick-tap penalty from Luke McGrath caught Munster off guard.

Another penalty from an identical position, just to the left of the posts, should have brought up first score on five minutes though, Sexton seeing his routine shot at goal pull to the left and wide.

The home side were controlling possession but struggling to make it count; Ringrose's break towards the 22 ended with a Cian Healy knock-on, two lineouts in good territory were spoiled by crooked throws, while Sexton also spilled a simple pass to allow Munster’s defence a chance to breathe.

Munster were having difficulty exiting their own half though, their only real sniff at the Leinster 22 coming just after the 10-minute mark, and it ended within a few phases thanks to a big counter-ruck by James Ryan.

On the quarter-hour, the Munster defence again had to scramble, Jamie Osborne finding space down the left wing after Ringrose’s decoy run opened up the space, but his pass back inside to McGrath was disrupted by Shane Daly.

With attacking opportunities being so rare in the opening quarter for Munster, every chance at points had to be snaffled up, but they saw a Carbery penalty drift wide of the posts on 19 minutes. Thankfully, the Munster out-half was handed a second chance moments later, and this time he made it count to put the visitors 3-0 in front.

The game boiled over on 26 minutes when Munster’s Keynan Knox was sin-binned for a reckless clearout on James Ryan. The Leinster lock may have counted himself lucky not to also go to the bin for his retaliation, although on another day Knox could well have seen red.

Dave Kilcoyne was summoned from the bench as Leinster opted for a scrum off the resulting penalty, and while the set-piece was messy, it was enough for them to secure possession, picking and driving for the line, with Penny getting the decisive touchdown for the game’s opening try.

Sexton’s conversion made it 7-3, but despite the man advantage, they couldn’t make it count for more.

Five minutes later Carbery was able to chip the score back to 7-6 with his second penalty of the afternoon, the field position secured after a brilliant penalty won by their makeshift scrum.

Knox was only back on the field a matter of seconds before Munster were again down to 14 players.

This time it was Kleyn who was yellow-carded after a heavy collision with Osborne, the Munster lock having accidentally clattered into the wing as he jumped to block the Leinster man’s chip over the top.

Sexton turned down a shot at goal from the resulting penalty and kicked to the corner, looking to land a big blow right on half-time, but they were once again frustrated by a scrappy Munster defence, who made it to the break 7-6 behind after holding Leinster’s maul up over the line.

If the hosts were feeling nervous at their wasteful first half, they were feeling even hotter under the collar five minutes into the second as Munster pounced to score their first try.

Caelan Doris was slow to dive on a loose ball, beaten to it by Jack O'Donoghue, who fly-hacked it along the ground. And after Munster turned the ball over inside the Leinster 22, it eventually found its way to Gavin Coombes, who spotted his cousin Liam all alone on the left wing, and the No 8’s pass was on the money as the Garryowen clubman dived over to score.

We had a game on our hands as the rain started to pour in Dublin 4, Carbery converting from the left to send Munster 13-12 in front as they welcomed Kleyn back from the sin-bin.

But Leinster’s response was immediate. Winning a penalty in good territory after an infringement by Murray, they punted towards the corner and this time their maul went to work.

As the maul stepped towards the line, McGrath’s clever decoy step to the right drew Murray towards him, creating enough space for Sheehan to dive over and score, with Sexton’s conversion putting his side back in front at 14-13.

Before the hour mark, Carbery limped off as Ireland head coach Andy Farrell looked on, and a Johnny Sexton penalty nudged Leinster into a 17-13 lead.

And in the 62nd minute, the hosts had their third try. McGrath sniped for the line off the back of a maul, the finish too easy as he found the soft shoulders of Ben Healy and Kilcoyne.

Sexton’s missed conversion left the gap at just nine points, 22-13, but Munster wouldn’t buckle, working their way down towards the Leinster line as they looked to get back within a score.

They spent more than six minutes hammering away to no avail, a dominant scrum penalty eventually relieving the pressure for the hosts.

Leinster finally put the game to bed as the clock hit 77 minutes, substitute Rob Russell finishing off an overlap in the corner after a wonderful piece of link-up play by Ringrose and Doris.

They couldn’t add the final conversion though, Ross Byrne’s effort coming back off the post, leaving his side 14-point winners after a hugely physical 80 minutes. 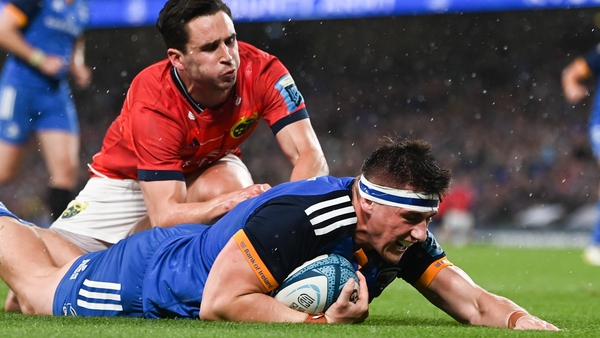