By Tony Tighe at The Sportsground

Leinster edged an interprovincial slugfest against Connacht as Cormac Foley's early try saw them maintain their 100% start to the season.

Having run in eight tries in last weekend's thriller against the Sharks, just the one was required on a wet and windy night in Galway.

There was just one further score, Ciarán Frawley kicking a late insurance penalty on his return from injury as Leinster made it five wins from five in the BKT United Rugby Championship.

Connacht will be frustrated to leave empty-handed but it was a similar tale for Andy Friend’s side, who faltered when inside scoring range.

The hosts were dogged in defence, hassling Leinster at lineout time and disrupting the visitors’ maul, but their own set-piece let them down at key moments.

Leinster had won on their last five visits to the Sportsground and they got to a dream start as their driving maul carved out another try inside three minutes.

The excellent Van der Flier peeled off a maul and shrugged off Colm Reilly's attempted tackle before putting Foley over in the corner, with Ross Byrne nailing the conversion.

It was a dominant opening quarter from Leinster yet they had little to show for it. Connacht repelled three further lineout drives and they also made a couple of crucial lineout steals deep inside their own half.

Garry Ringrose showcased some fine footwork to get on the outside of Jack Carty on 15 minutes, but Conor Fitzgerald bravely dived onto Byrne’s grubber and an excellent kick chase by Gavin Thornbury moved play back to halfway.

Thornbury, Niall Murray and ex-Leinster forward Josh Murphy were central to Connacht’s efforts but that defensive resistance went unrewarded by an inaccurate attack that again committed a plethora of handling errors. 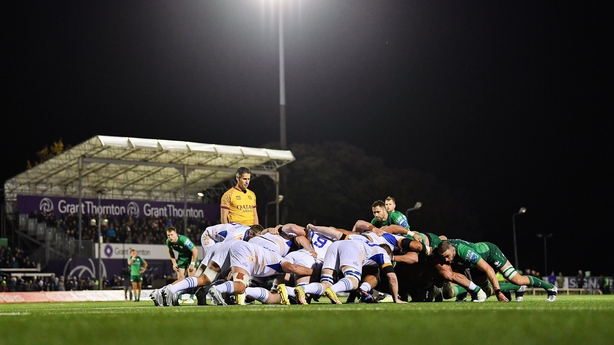 Connacht should have scored a try on 26 minutes after mauling their way to the Leinster tryline, but Colm Reilly flung a looping pass into touch when he had an overlap down the left.

The heavens opened on the half-hour with both teams having to contend with a swirling breeze, and Byrne was wayward off the tee after a huge drive from Tadhg Furlong earned his side a scrum penalty.

The Ireland and Lions prop then conceded a penalty at scrum time in the final minute of the half and that led to a late siege from Connacht, but they again failed to make it count. After being held up over the line while playing advantage, they set up a second lineout drive but on this occasion were forced into touch on the final play.

Leinster’s maul defence further frustrated the home side after the restart but they were struggling to carve out any scoring opportunities themselves.

Chances continued to be spurned in the Galway rain.

Byrne pulled another penalty wide, this time from further out, Oisín Dowling failed to gather fellow replacement Grant Stewart’s throw from a five-metre lineout, Leinster were twice turned over in front of the Connacht posts, while Mack Hansen and Caolin Blade both put kicks out on the full.

Murray was yellow-carded with four minutes remaining for killing the ball following Van der Flier's brilliant breakaway downfield, and Frawley kicked the penalty to deny Connacht the consolation of a losing bonus point.

Connacht's night was perhaps best summed up by a late Carty penalty that went dead. Plenty of effort but no reward.

"It's pleasing - and another inter-pro next week against Munster, they're coming thick and fast!"
Man of the Match Josh van der Flier spoke to @Connor_Morris75 after Leinster's 10-0 win over Connacht.#RTErugby #CONLEI pic.twitter.com/T2JZHwaBBH

Watch Leinster v Munster in the BKT United Rugby Championship on 22 October on RTÉ2 and RTÉ Player, and listen to live commentary on RTÉ Radio 1 Extra 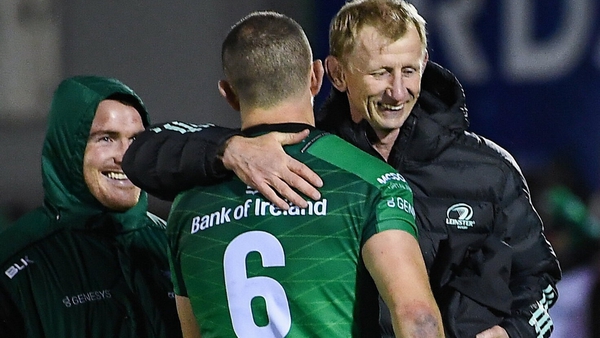