Eddie O'Sullivan fears that Connacht's failure to fix their defensive issues during the summer could send their season into a tailspin.

Connacht had the sixth-worst defence in last season’s BKT United Rugby Championship, conceding 67 tries in eight matches, and those problems have continued into this campaign.

The Westerners shipped 13 tries in their opening three matches as they were beaten by Ulster, the DHL Stormers and Vodacom Bulls, and the pressure is already mounting ahead of Friday’s derby with Munster on the new 4G pitch at the Sportsground.

"Connacht’s attack is worth watching, they do score points and play a nice brand of rugby with the ball, but you can’t be exciting with the ball and without it," former Ireland boss O’Sullivan said on Against The Head.

"You’ve got to stop the opposition from scoring so easily. There’s no evidence this season that they’ve changed that. That’s going to be a huge bugbear."

Having suffered on the road in the opening three rounds, Connacht now play three successive home games against Munster, Leinster and the Scarlets, and O’Sullivan warned they must get some points on the board soon or their campaign could crumble.

"The problem here is you need to get success at some point," said O’Sullivan.

"When you lose two games, then three, and it ticks into four, the players start to lose their energy, they worry, tension comes into the team. It’s harder to get the first victory then. They need at some point to do something.

"Next weekend is a big game for both Munster and Connacht. There’s going to be tears in Galway, whether they’re green or red is another question. Somebody needs a result to clear their heads."

Former Ulster and Ireland centre Darren Cave said Connacht have been architects of their own downfall due to a porous defence and high error rate.

They are already nine points adrift of the top eight in the URC and Cave fears this could be a difficult season for Andy Friend's men.

"I get frustrated with Connacht because I do think there’s so much more in them," said Cave.

"Coming into this season I would have said their discipline is not good enough and they let teams score points too easily. Having watched them three times this year, they’ve had tough fixtures, but the tougher the fixture the harder you’ve got to make it for the opposition.

"I’m thinking back to some of their defence in Belfast in week one, letting a No 8 score from the halfway line in week two. Some of those mauls against the Bulls are hard to stop but throwing interceptions, letting players run through the middle, that’s not hard to stop.

"They’ve got to make it harder for the opposition or it’s going to be another really long season for them.

"They can improve. Part of the frustration with Connacht is there’s more in them. So much of it is self-inflicted.

"You’re looking at the league table and they’re a long way back. The fixtures won’t get any easier unless they get their error rate down." 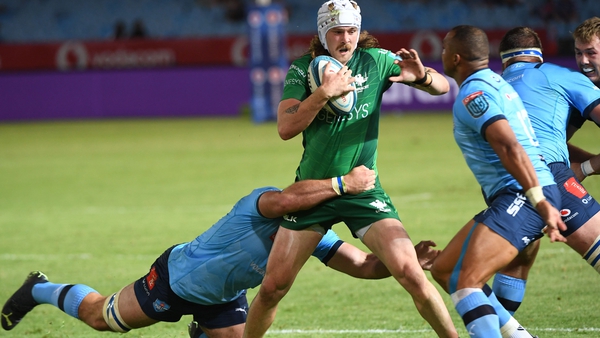