While it hasn't been the only reason for Leinster's dominance in Ireland during Leo Cullen's time in charge, the last seven years have been built on stability behind the scenes.

The changes at the province since Cullen took charge in 2015 have been incremental; Stuart Lancaster's arrival in 2016, Felipe Contepomi coming on board in 2018 after Girvan Dempsey's departure, and John Fogarty's promotion to the national team seeing Robin McBryde join in 2019.

During his seven-year tenure, he's seen multiple head coaches and directors of rugby come and go across the other three provinces. At Munster it was Rassie Erasmus and Jacques Nienaber, followed by Johann van Graan and Stephen Larkham, with the high-profile departure of Jerry Flannery and Felix Jones in between.

Pat Lam's Connacht toppled Leinster during Cullen's first season in charge, before they went backwards under Kieran Keane, and the recent coaching restructure indicates they're already thinking about how to transition long-term when current director of rugby Andy Friend moves on.

Ulster's re-emergence has coincided with some stability of their own under Dan McFarland, but the two years prior to his arrival saw them sink to arguably their lowest ever point, with Les Kiss, Neil Doak and Jono Gibbes presiding over a disastrous few seasons.

All the while, Leinster weren't doing much aside from winning. After understandable teething problems in Cullen's first year, they improved after the arrival of Lancaster, even if the silverware was another season away. In the last five campaigns they've won four URC titles and a Champions Cup, losing two other finals.

And in the last six months, they've learned the price of that success.

Over the summer Contepomi returned to his native Argentina to work alongside Michael Cheika, while Denis Leamy's head was turned by Munster. Given the senior role he had alongside Cullen, Lancaster's exit to Racing 92 next summer leaves Leinster with more than just a vacancy to fill, but potentially a complete restructure of their coaching operation.

It leaves their new CEO Shane Nolan with a huge job at the very top of his in-tray. Nolan takes up the role in November when their long-serving chief executive Mick Dawson retires after 21 years in the job. Just another layer of uncertainty to navigate.

There's also change coming on the pitch. In recent seasons the province have said goodbye to some of their all-time greats, with the likes of Jamie Heaslip, Mike Ross, Isa Nacewa, Sean O'Brien, Rob Kearney and Devin Toner all retiring, but for each of those departures, there were ready-made replacements, straight off the schools and academy conveyor belt.

The appointment, or appointments, Leinster make will largely depend on what Cullen wants to do with his own future.

The pending retirement of Johnny Sexton is an issue for Irish rugby to deal with as much as Leinster rugby, but the future of the No 10 jersey remains uncertain for the province with Ross Byrne, Harry Byrne and Ciarán Frawley all laying claim to it.

Whether or not it's mirrored in the results, the province are headed into a period of transition. But according to their head coach, the transition is constant.

"The transitional phase is always there. It moves on so quickly," said Cullen last week, when asked about the recent and future changes at the province.

"Obviously when I started off in this role I was given this 'caretaker' title, which is sort of the way I still feel, it’s like a caretaker-type role. At the time I remember I was struggling to think of how many successful caretakers there had been over the years in any sport, but here we are still.

"But I’ve had unbelievable support from the club, and some of the coaches that have been in have been outstanding, and that’s the way we want it to be forevermore.

"But it’s always in some level of transition, isn’t it?

"Again, sometimes change has to happen. That’s just the way it is."

Lancaster spoke in a similar vein of the cyclical nature of sport after his move to Racing 92 was confirmed, pointing out the way Leinster's squad has changed bit by bit across his six years in Dublin.

"I would say part of the job of a coach is to make yourself redundant really, to do a good job where you've developed them, their game understanding, their skills, their knowledge, their ownership of the team and I do think Leinster are like that now," Lancaster said.

"So yes, Johnny is going to be missed massively but you’ve got a leadership team now of Robbie Henshaw, Garry Ringrose, James Ryan, Caelan Doris, Luke McGrath and Jamison Gibson-Park. You’ve got all these lads who are established international players and that’s what I’ve said to the players.

"When I first arrived in 2016, the likes of Will Connors, Hugo Keenan, Jimmy O’Brien, they were first-year academy. James Ryan had pulled his hamstring, he wasn’t even training when I arrived. Lads have grown up and become international players while I’ve been here. They’ve got engaged, they’ve got married and had kids since I’ve been here. So I think Leinster are very well set up for the future.

"Obviously, the new structure will probably, hopefully, be similar to the old, with different personnel. But I do think the players will be able to drive a lot themselves and hopefully a new coach will come in, bring new ideas, which I think will be good for the group anyway."

The appointment, or appointments, Leinster make will largely depend on what Cullen wants to do with his own future.

In each of the last two seasons, the Leinster head coach has only signed extensions of 12 months at a time, the latest of which expires this summer.

Prospective coaches only have to look at this week's Emerging Ireland tour of South Africa to see how quickly the goalposts can be moved by the union, compared to the autonomy that their Top14 or Premiership rivals have around selection.

He's always been vague when questioned about his future ambitions in the game. Back in February, when asked if he had aspirations beyond the Leinster base at UCD, he was coy as usual.

"Listen, there are some big decisions that would have to be made around family and all of the rest. It would just depend on the circumstances. That's very hypothetical and I’m not going to get into that too much today.

"It's really about the here and now."

It's purely speculative, but his name would likely be towards the top of the list should IRFU performance director David Nucifora decide to move on from his role when his contract expires after the World Cup in November.

Appointing a coach to work alongside Cullen, and appointing one to replace him are two very different tasks, and the sooner Leinster and Cullen decide their plans for next season, the better.

The consolation for Leinster is that with a World Cup looming, they're going to market at the right time, just as head coaches and high-profile assistants in the Test arena may be considering their futures beyond October 2023.

It might sound jarring for Munster fans, but just as he was for his home province last year, Ronan O'Gara would certainly be a contender should Cullen also be moving on, although a club job in Ireland might be below his radar given his status in the game right now.

Likewise Mark McCall. The Bangor native has masterminded some of Leinster's toughest days in recent history, and it's a black mark against the IRFU that heaven and earth hasn't been moved to get him to Ireland in recent years.

If Cullen were to stay on in his current role, Noel McNamara of the Sharks would be a viable addition. Having moved to South Africa last year to gain senior coaching experience, the former Leinster academy chief's familiarity with the province would bring some valuable continuity.

Given their history and loaded squad, a coaching opportunity with Leinster would be an attractive one for almost anybody in the game, but the flip side of the coin is the IRFU's influence around selection and player availability.

Prospective coaches only have to look at this week's Emerging Ireland tour of South Africa to see how quickly the goalposts can be moved by the union, compared to the autonomy that their Top 14 or Premiership rivals have around selection.

Whoever comes in, it will hopefully be for the long haul. With the benefit of hindsight, it seems remarkable that when Leinster first approached Lancaster about coming on board in 2016, he was genuinely short of offers.

It didn't take long for his share price to rocket, and the fact that they've been able to get seven seasons out of him speaks to the quality of the job.

They'll be doing well to get the same seven years out of his successor. 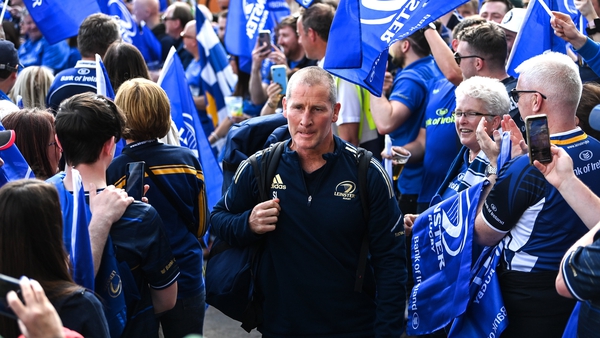 Stuart Lancaster: Leaving Leinster for Racing 92 was a tough decision but the time is right