Donncha O'Callaghan says Munster's wider squad group need to show more leadership on the pitch, after the province fell to a second defeat to begin the new season.

Following last week's 20-13 loss in Cardiff, Munster regressed further in their 23-17 defeat to the Dragons, losing to the Welsh side for the first time since 2015.

Graham Rowntree's side had also been able to call upon most of their frontline international players, with Tadhg Beirne, Peter O'Mahony, Joey Carbery and Keith Earls all featuring.

Earls' day was ended early due to injury, while Beirne looked sluggish after replacing Jean Kleyn in the opening half, with Kleyn departed due to a HIA.

'There comes a point, as a player, that you've got to take responsibility for your role, and that's it'

O'Callaghan, Munster's record appearance holder, was scathing in his assessment of the performance, and says there needs to be greater responsibility taken by what he called the "middle group" in the squad, who can maintain the standards even when the international players are away in Ireland camp.

"There has to be a core group who are there, week-in and week-out, that have to say it's unacceptable," he said on RTÉ2's coverage after the game.

"If Munster are to drive on, you have to look at when they're without their internationals.

"For me, I find it frustrating that there is a middle group not driving the standards and today was a perfect example. You get your internationals back, and you should look after them.

"I'm not making excuses, but players will make mistakes in their first game back, you need a club player who have their backs.

"You hate making comparisons, but you look at Luke McGrath and Rhys Ruddock, they're the guys who drive it [at Leinster]."

Fiona Coghlan was equally critical of Munster's performance, after they were held scoreless for the entire second half, while their two tries came in a five-minute period just before the break.

"It was a shocking game of rugby in general. It was error-strewn from both sides. It's nothing to do with coaching, ball goes to ground, players have to take responsibility to mind the ball. The players are good enough that they should be able to do it.

"It's not acceptable. Granted some of the players are only back a week, there's a lack of sharpness and they probably have a hangover from the holiday, but the level of some of them, that's still not a good enough performance."

The Dragons came into the game in disarray, after the reported departure of director of rugby Dean Ryan during the week, while they shipped a 44-6 defeat in their URC opener against Edinburgh a week ago.

"You can't take away from Dragons' performance, they were questioned as a group and an awful lot of senior players certainly stood up, you look at [Ross] Moriarty, [Will] Rowlands and even JJ [Hanrahan] himself, big performances," O'Callaghan added.

"But Munster knew that was coming, and to go and put in a performance like that is under par. Too many errors, we're all looking at the coaching ticket, but you can't get into that if the players put in that type of performance. Over 13 handling errors, breakdown again there was a problem, the set-piece was a mess.

"There comes a point as a player, you have to take responsibility for your job and your role. If you're carrying the ball into contact you look after it. Just an underperformance from a playing group, yet again.

"To come out and not even fire a shot in the second half is really, really frustrating. It was one of those games you'd be disappointed with, because you know going into the game how to take on Newport in Rodney Parade; it's three, six, nine, 12, they'll get frustrated and try do something, but the only one running that game plan now was JJ Hanrahan.

"It was on individuals today, and I think they can be really hard on themselves. A really frustrating [one] to have to watch." 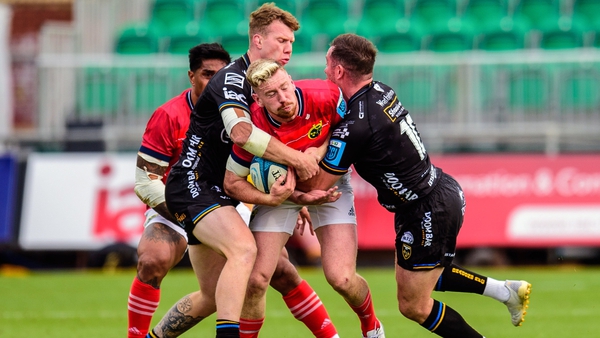