Munster will renew rivalries with Toulouse in the Champions Cup next season, after the pool stage draw pitted them together again.

The five-time champions defeated Munster in the most dramatic circumstances in this year's quarter-final, winning a placekicking competition following a 24-24 draw at the Aviva Stadium.

Both will be in Pool B of next season's Champions Cup, with Munster also set to face Northampton Saints in a difficult set of fixtures.

Ulster will also be in Pool B, and will welcome Ronan O'Gara and the defending champions La Rochelle to Belfast, while Dan McFarland's side will also go up against Premiership side Sale.

Last year's beaten finalists Leinster have been drawn against Racing 92 for a mouthwatering set of pool matches, while Leo Cullen's side will also go up against Gloucester in Pool A.

Just as last season, there will be two larger pools of 12 teams each, with the top eight teams from each side of the draw advancing to the Round of 16.

The pool stages will commence on the weekend of 9/10/11 December, with the final to be played at the Aviva Stadium on Saturday 19 May. 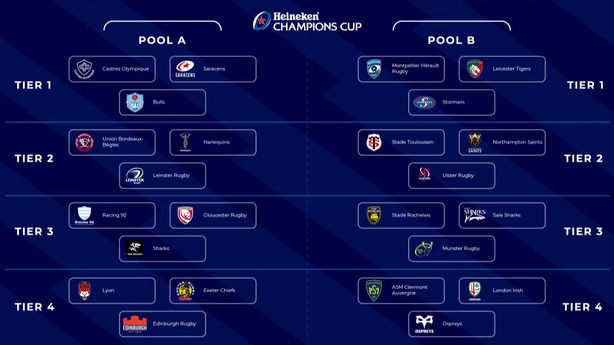 Meanwhile, Connacht will face Brive and Newcastle Falcons in Pool A of the Challenge Cup.

It will mark a swift return to the Sportsground for both Sammy Arnold and Abraham Papali'i who left Connacht for the French side this summer.

The top six teams in each 10-team pool will advance to the Round of 16, along with four teams who will drop down from the Champions Cup.