Billed as a 'win or go home' clash, it’s Ulster who march on to a United Rugby Championship semi-final, while the Johann van Graan era at Munster comes to something of an embarrassing end.

In addition, Damian de Allende signed off on an ultimately disappointing two-year spell showing glimpses of why he was brought to the province in the first place.

But this was Ulster and Dan McFarland’s night.

Both coaches went out with the same goal but only one had his side primed for the battle.

Ulster, who will face an away trip to the Stormers or Edinburgh, ran in five tries and the game was over as a contest soon after half-time. 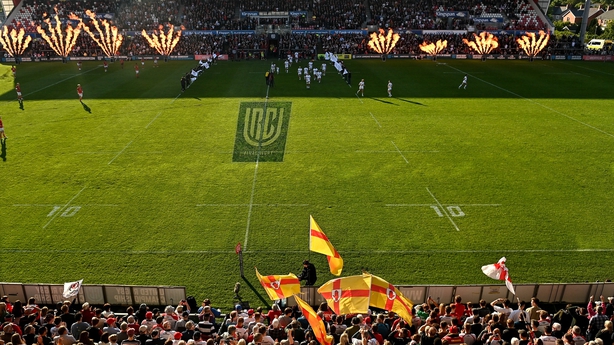 If this was an old-fashioned Irish trial, there would be a lot more players from the white side checking that their passports were in order than from the reds.

Offsides, holding on, taking out a player at the lineout, high tackles, knock-ons, wayward passing, missed tackles; Munster's performance was a horror show for their loyal band of followers who had made the long trip north.

The mistakes began with a Peter O’Mahony knock on from the opening kick and that lack of focus soon infected the rest of the team, who had wanted to put right some wrongs from their final regular-season loss to Leinster.

That had cost them a home quarter-final and it was Ulster who played up to their boisterous supporters in a sun-drenched Kingspan Stadium. 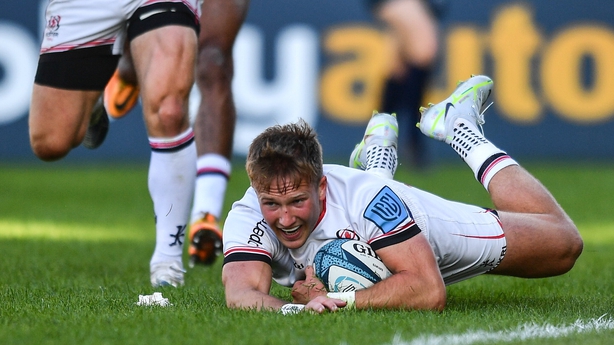 The hosts, who had finished third in the league standings, pinned Munster into their own 22 for the opening 10 minutes and duly came away with a deserved lead.

Referee Jaco Peyper awarded a penalty for offside as an Ulster maul headed to the line.

Instead of everyone getting set to defend, a few Munster forwards got involved in an off the ball scuffle with their counterparts and by the time they turned around James Hume, excellent throughout, had tapped quickly and passed to John Cooney, who, on the occasion of his 100th appearance for the province, dotted down. Way too easy.

But Munster grabbed something of a foothold and a spell of pressure close to the line led to Jean Kleyn diving onto a loose ball under the posts. Peyper needed to rule out a knock on and did so as Joey Carbery converted and the sides were level in the 19th minute.

However, Robert Baloucoune timed his hit on Carbery to perfection and earned a turnover when the out-half failed to release on the ground. 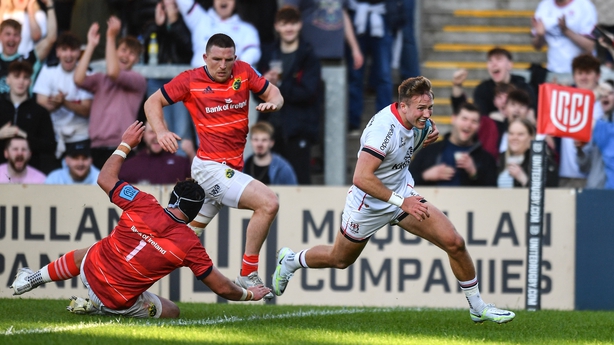 Within two minutes, Ulster retook the lead with a superbly worked score.

A clean lineout provided quick ball for Burns; Hume found Baloucoune on a perfect line off his own wing and Ethan McIlroy offloaded back inside for Stewart Moore to run in.

Munster couldn’t deal with the defensive linespeed and Conor Murray, who departed injured for Craig Casey just before half-time, twice threw poor passes that stopped any momentum that Alex Kendellen or Kleyn had tried to inject.

Duane Vermeulen, Iain Henderson and Alan O’Connor carried hard at Munster and created space for Stuart McCloskey and Hume to do more damage; the latter spinning the ball wide for Moore, who was adjudged to have touched down despite the challenge of Keith Earls.

Only a rash clearout by the full-back, who started instead of the injured Mike Lowry, prevented Ulster grabbing a fourth before the break but they would have been satisfied with their 19-7 lead. 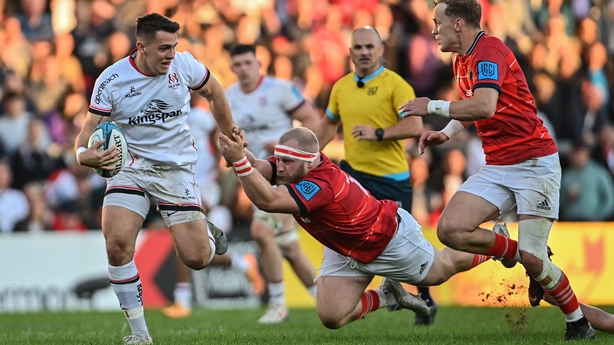 And they didn’t have to wait long for number four after McCloskey and Hume combined brilliantly in midfield to set up Nick Timoney for a 40-metre sprint.

Gavin Coombes, making his return from an ankle injury, appeared to have hit back straight away after dropping onto his own block down of a Cooney clearance, but assistant Hollie Davidson urged Peyper to have another look and the replay confirmed the Munster number 8 had knocked on.

Eventually a spell of pressure close to the line told and Earls finished spectacularly in the corner. 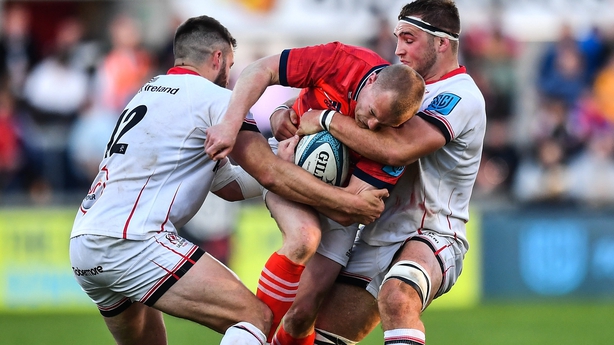 The spills, on a perfect night for rugby, just kept coming form the men in red. It was hard not to think that they simply didn’t want to be there.

Cooney tapped over a penalty just short of the hour mark and Ulster led by 29-12.

Hume then got the try his performance deserved, evading a poor tackle before scrambling over, this time replacement Nathan Doak kicked the extras.

Baloucoune almost broke free but got held up in the corner as the Ulster crowd, baying for more tries, danced with delight.

Earls crashed over his second late on but there was no consolation for Munster.

Listen to updates from Leinster v Glasgow on Saturday Sport on RTÉ Radio 1. 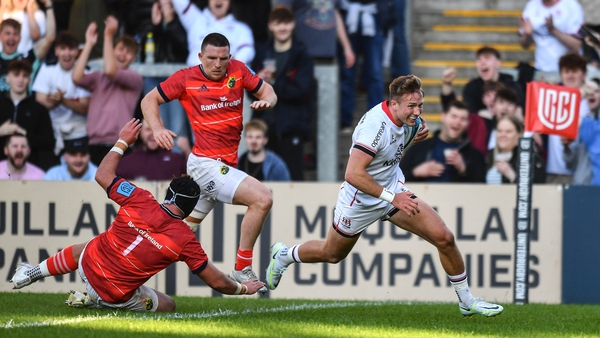