Ulster have confirmed that Ireland internationals Jack McGrath and Sean Reidy are among five senior players departing at the end of the season.

The pair will move on from Kingspan Stadium along with Mick Kearney, David O'Connor and Ross Kane.

McGrath's three years in Belfast have been blighted by injury, with a serious hip injury sidelining him from November 2020 until December 2021.

However, further issues with his hip injury have seen him unavailable since March, and the 2017 British and Irish Lion recently is now set for a further operation.

Despite agreeing a contract extension with the province in January, Ulster have this afternoon confirmed the former Leinster loosehead is to be released.

"A big thanks goes to Ulster Rugby and the coaches during my time in Belfast. My team-mates became close friends and I will always value those friendships," McGrath said.

"I will miss the incredible support of the Ulster fans, it's a great feeling running out at Kingspan Stadium as a home player, and it’s a shame I can’t get the opportunity to say farewell."

And despite his extensive injury issues in recent seasons, the 32-year-old insists he is determined to continue his career.

"As for the future, I’m now a free agent and I have no intention of retiring. I face months of rehabbing in my battle for full fitness, but I am surrounded by a top-class team who will ensure I am in great shape to return to play.

"I am fully committed to becoming the first player in any sport to play at an elite level with two hip resurfacing operations."

Reidy will return to New Zealand after eight years in Belfast.

The Auckland native, who qualified for Ireland through his paternal grandfather, played more than 150 times for Ulster since 2014, as well as winning two caps for Ireland in 2016 and 2017.

"It has been a privilege to represent the province and to have the opportunity to play for Ireland.

"Belfast has felt like home these past years, and we have made lifelong friendships. I leave this place with only good memories," the flanker said.

Prop Ross Kane is leaving to join English Championship side Ealing Trailfinders, while versatile forward David O'Connor also leaves permanently, having been on loan at Ealing this season.

Veteran lock Mick Kearney will also move on, having played nine times for Dan McFarland's side in the current campaign. 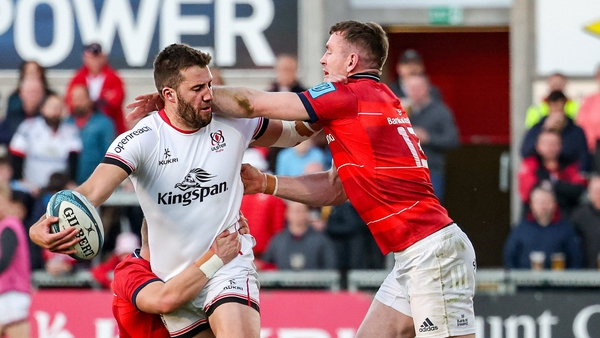