In the United Rugby Championship sales pitch, these were the nights they were promising.

High stakes, World Cup winners, British and Irish Lions, full-blooded rugby under the Friday night lights. And it went right down to the wire.

When the Sharks shipped 42 points on their URC debut at Thomond Park last September, few would have thought they'd be coming to Belfast in Round 18 looking to stake their claim on a home-quarter final.

The squad they brought to Kingspan Stadium was unrecognisable from the group in Limerick though. Backed-up by their Springbok heavyweights, and the return of Lukhanyo Am from Japan, Sean Everitt's side fancied their chances of sealing a top four finish.

So too, though, did Ulster.

The task for both sides was simple; win, and the home quarter-final is yours. For Ulster, it would be mission complete.

Dan McFarland's side weren't at their best this evening, but they won this game through their physicality. The Sharks brought with them a ferocious pack and a reputation for using it, but the home side continually met them at the gainline.

Iain Henderson was immense, the captain leading by example both in the tight and the loose, where his deft offload to Stuart McCloskey set up his side's second try.

Duane Vermeulen tackled relentlessly, while Nick Timoney came up with two huge turnovers at the start and end of the first half. And with the game in the balance Kieran Treadwell and Matty Rea came off the bench and made an impact, Treadwell with some huge tackles, while Rea prevented a near-try late on with an excellent turnover. 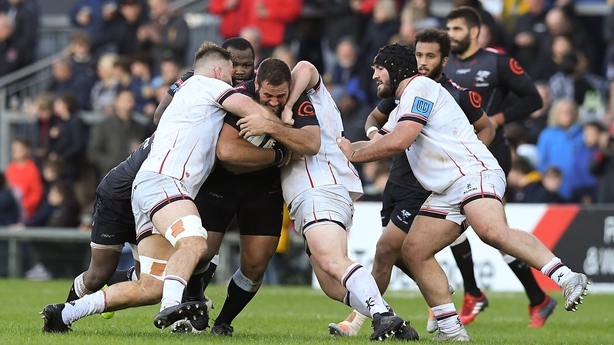 On a showery night, handling proved difficult for both sides, but Ulster showed just enough in flashes. James Hume joined his centre partner McCloskey in scoring a second half try, while the pair marshalled Am diligently in defence.

They had been 10-0 in front at the break, Mike Lowry's try on 25 minutes giving them the cushion, and despite the Sharks fighting back with second half tries for Ntuthuko Mchunu, Marius Louw and Grant Williams, Ulster just about held the late fightback off.

The win ensures a home-quarter final for the province in two weeks time, while the Sharks will more than likely be be on the road, and could very well be back in Belfast in a fortnight.

A torrential downpour before kickoff dictated the style of rugby in the opening stages, with both sides sending kicks high into the evening sun that was peeking out at the Aquinas end of Kingspan Stadium. 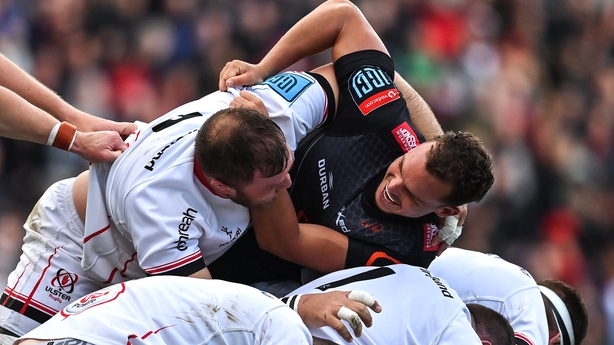 Handling was an issue too, with Ethan McIlroy spurning an early tryscoring opportunity when his wide pass to Rob Baloucone on the overlap seemed to slip out of his hands on release, before skidding out over the touchline.

The handling errors were plentiful, but both sides had positive intentions. A dropped catch in his own 22 by Baloucone almost led to a Sharks try, before they managed to bundle Phepsi Buthelezi into touch, while moments later McIlroy almost connected with a Billy Burns crossfield kick, only to meet the same fate.

After a scoreless quarter of an hour, John Cooney tapped over the first points with a routine penalty in front of the posts, Henderson and Alan O'Connor combining for a turnover before Ox Nche was called for offside.

The Sharks were losing their discipline; Curwin Bosh tackled Baloucone in the air, and shortly after on 25 minutes Buthelezi was penalised, as Ulster kicked to the corner, which led to the opening try.

After a number of short carries, it was Hume who unlocked the Sharks defence, carrying to the gainline before popping back to Burns. The outhalf's looping pass just evaded the diving Am to find McIlroy, and the wing showed tremendous hands to flick the ball back inside to Lowry, who dived over to score. 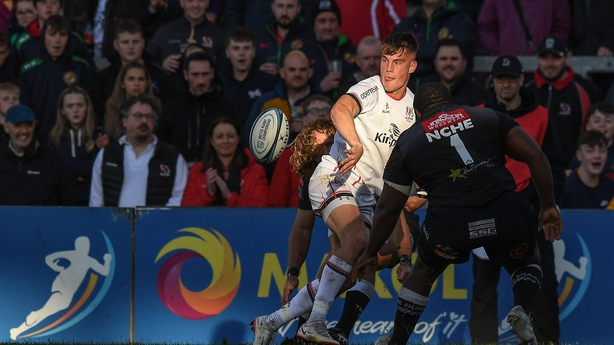 Cooney's conversion brought up double figures for Ulster, who pushed the lead out to 10-0.

The first blow for Ulster came on the half-hour mark, when Lowry saw his night ended. The full-back stood his ground well to tackle his opposite Aphelele Fassi, but came out worse for wear, and a bloodied Ireland international was walked off for a HIA, from which he didn't return.

Trailing by 10 on the run-up to half time, the Sharks opted for the direct approach. First, they forced a penalty at the scrum, which Bosh kicked wide.

Soon after, Cooney knocked on his own half, and the visitors started running hard and straight. Centre Louw's carry brought them into the 22, but Ulster's defence stood tall. Tom O'Toole and Vermeulen were among those who made multiple big tackles, before Timoney ended the passage with a jackal turnover to end the half, Ulster 10 in front at the whistle.

The second half was only four minutes old when McCloskey ran in for the second try, as Ulster came out from the break hot.

There looked to be very little on when Ulster were running the phases on the edge of the 22, before Henderson's offload in the tackle landed perfectly in the hands of McCloskey, who sprinted to the posts, shaking off a feeble final tackle attempt by Fassi. 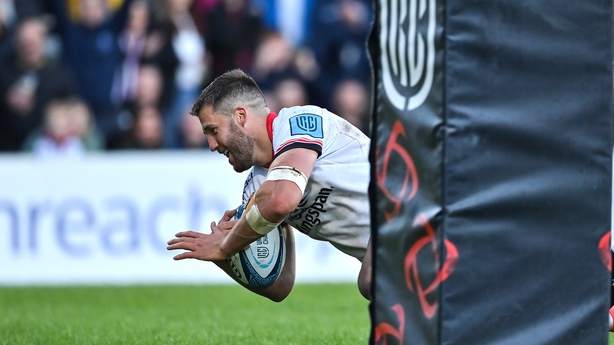 The conversion for Cooney was directly under the posts, and he tapped it over to give his side a 17-0 lead.

Henderson was playing some inspired stuff, and two minutes later he came up with the goods again, stealing a lineout in his own 22 after the Sharks had kicked a penalty to the corner.

The home side were forcing mistake after mistake, Marcus Rea getting in on the act with a big steal on the ground, and after McIlroy's big clearing kick, Rob Lyttle chased it all the way to the opposite 22, forcing possession and territory for his side.

Desperately needing something, the Sharks went direct again, and forced Ulster into conceding a pair of penalties, and after camping themselves short of the line they carried relentlessly at the home side, who matched them in every tackle.

Vermeulen put in two crunching tackles, while Kieran Treadwell and Eric O'Sullivan both came off the bench to make crucial, dominant tackles. And after patiently holding their defensive shape, they eventually forced scrum-half Jaden Hendrikse into a knock-on.

It was a temporary reprieve, a penalty allowing the Sharks another 22 entry, and this time they forced their way over, replacement loosehead Ntuthuko Mchunu forcing his way over, and Bosch converting to close the gap to 17-7.

If the Ravenhill supporters were feeling the pressure, they only had to wait two minutes to let off steam.

A hard, flat pass from Burns in midfield released the valve, and it allowed Baloucone find the edge of the defence and break clear. From there it was simple hands, Baloucoune popping inside to Cooney, before the scrum-half played in Hume who coasted in under the posts. 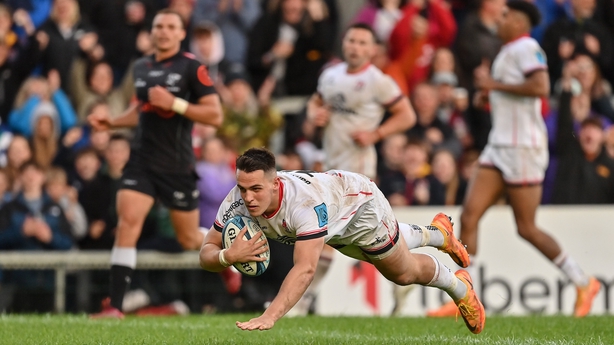 Cooney's fourth kick from four restored the 17-point advantage, 24-7 with less than a quarter of an hour to play.

With five minutes left, Grant Williams caught John Andrew in defence to set up Louw for a second Sharks try, which Boeta Chamberlain converted to make it 24-14.

And although Williams sprinted clear of the Ulster cover to score a final try in the 79th minute, they couldn't pull off a miracle comeback.

Both sides will now sit back and watch the weekend unfold. Ulster will be back at Kingspan Stadium again in two weeks. Who they face, remains to be seen.