Three years can be a long time in rugby, and Hugo Keenan is the perfect example.

When Leinster last played in a Heineken Champions Cup final, there were probably few fans outside the province who knew who he was.

Even though he was a month shy of turning 23-years-old, the full-back was still in the Leinster academy, having detoured along the development path due to a couple of seasons on the sevens circuit.

He'd played just five games of rugby for Leinster to that point, and was far enough down the pecking order that he didn't even travel with the squad to the final in Newcastle, instead watching it with his fellow academy members at Bective Rangers clubhouse.

Fast forward three years and Keenan is a nailed-on starter for both Leinster and Ireland, so crucial to next week's Champions Cup final against La Rochelle that he's about as likely to tog out against Munster this weekend as Leo Cullen is.

With a number one seed secure for the URC playoffs, Keenan will be rested along with most of the province's frontline players, Leinster's previous form this season allowing them the luxury of spreading their wealth of talent across both competitions.

"It's good, it will be nice to get a bit of a break this weekend, but there will still be a good side put out against Munster and it's still a huge game," Keenan said, at an event for Leinster Rugby and their innovation partners BearingPoint.

"We are also looking to prep those lads who are playing to make sure they perform and hopefully get the win.

"I suppose it's an exciting time, isn't it? Two weeks to just look at La Rochelle, to preview them, to do our reviews from Toulouse and get ahead of the game early because there is a lot of work to do."

Next week's Marseille final will be Keenan's first as a player, while he also never made it to the decider as a fan, despite being a regular at Leinster games when he was a kid, going with his father who was a season-ticket holder at the RDS.

"You'd spend half of it playing rugby out the back on the grass patches. I was always a supporter growing up."

Being a fan makes it special, but so too is the fact that Keenan never really believed he would be here.

"This is only the start, I still feel like I haven't really achieved that much, we have Pro14 titles, but still haven't got a Grand Slam, or a Champions Cup. These are the main goals for me personally, but also the club and country."

His story has been well-told by now; for much of his time at school in Blackrock he was more accustomed to playing on the C and D teams, and was a sub on the 'social' team in fourth year, before it all clicked in his final terms.

Even his road through the professional ranks was slow, his two years playing in the Sevens programme meaning he was 23-years-old before he was picking up any real game time with Leinster. The path was slow, but once things clicked, they clicked.

"That was literally all I was worrying about then, trying to get out of the Sevens and become more of a XVs player. That's all you are concerned about.

"You can obviously dream and I'm sure I did as a youngster about playing in these games."

It helped that he had players from his peer group like James Ryan and Andrew Porter to follow. By the time he was getting his real break they had been established internationals, Grand Slam and European Cup winners. 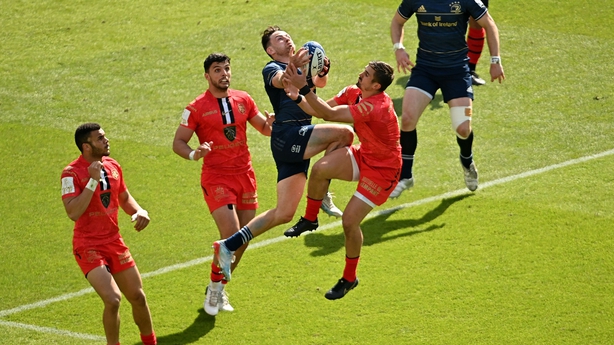 If they could do it, why couldn't he?

"They were sort of my year group in U20s, that would have given me a lot of confidence seeing lads I'd played with and come up the ranks with, who were performing and able to do it and able to step up at that level.

"That's given me some belief back then that someday I might get there, a bit of a slower process than the likes of those two, but they're the freak athletes with the size and power and ability.

"I suppose I'm 25 now, turning 26 [in June], so I spent two years in the sub-academy, three years in the academy, and half of that in the Sevens. It was a long process, I suppose I was never really a superstar growing up or anything like that, like I never thought I'd play for Ireland.

"I know Peter Smyth [IRFU's Head of the Elite Player Pathway] said to my day that he thought I'd get 50 caps - for Leinster - and I thought he was mad.

"It hasn't felt like a long process, because it was what I was expecting, but I've enjoyed the last couple of years.

"This is only the start, I still feel like I haven't really achieved that much, we have Pro14 titles, but still haven't got a Grand Slam, or a Champions Cup. These are the main goals for me personally, but also the club and country."

Standing in their way will be Ronan O'Gara's La Rochelle, an ideal cup final narrative. Not only are the French side led by one of Munster's favourite sons, but they also left Leo Cullen's side red-faced in the semi-finals last year (below) 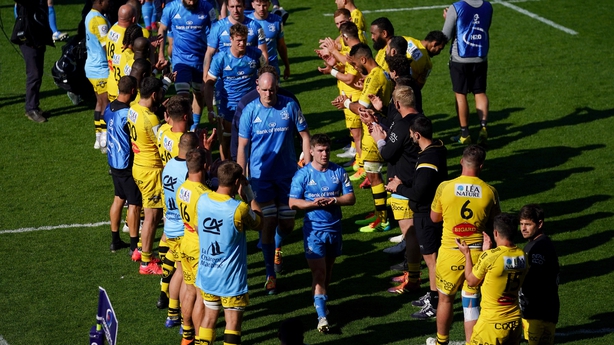 Stade Rochelais finished runner-up to Toulouse in both Europe and France last season, but are back in the final after knockout wins against Bordeaux-Begles, Montpellier and Racing 92 in recent weeks.

And although their domestic form has been patch this season, with O'Gara's side fighting for a playoff spot, Keenan believes they're even better than the side that overpowered Leinster 13 months ago.

"Yeah, I think they are [better]. It was sort of new for them to get to a semi-final last year and I'm sure they will take a lot of learnings from that, like ourselves and bring it into two weeks' time.

"It's two different sides but it's the bulk of the same squad, we are more experienced, they are as well. It's exciting."

If La Rochelle are an improvement on the 2021 model, so too are Leinster.

"It is that strength of depth, the underage setups, the coaching development, but then also when you get into Leinster, yesterday there were three XVs, so you're getting reps even if you're not in the starting team. You're playing against the best and earning from the best. You're always going to get an opportunity."

Against Toulouse in the semi-final they hit top gear, with their fluid attack ripping the defending champions apart at times.

The big difference on last season though is their physical condition. Leo Cullen's side were patched up at times in the second half of last season, where the condensed season meant less opportunity to rotate his squad, on top of injuries to Johnny Sexton, Jamison Gibson-Park and Caelan Doris to name three.

This season, their position in the URC has allowed Cullen map out his lineups weeks in advance, with Keenan and his fellow frontliners given the chance to rest up in between the last 16 and quarter-finals in Europe.

And after back-to-back weeks in the Champions Cup, they can now shuffle the pack for Saturday's visit of Munster to the Aviva, without the risk of injury to key players. "It does help to have the odd week off, but at the same time you don't want too many weekends off, you want to keep going with the flow, staying game-ready and match-hardened, so it's a bit of a balance. Having that squad is beneficial when you need it."

"It is that strength of depth, the underage setups, the coaching development, but then also when you get into Leinster, yesterday there were three XVs, so you're getting reps even if you're not in the starting team. You're playing against the best and earning from the best. You're always going to get an opportunity.

"Stu [Stuart Lancaster] is great at trying to build the habits, and build the ability through training. We're lucky to get that chance and that's how these young lads keep progressing and are able to slot in so seamlessly when they come into the team," he added.

The benefits of the rotation are two-fold also. As the frontline players get to rest, the second string can bank the experience of a derby against what will likely be a stacked Munster squad.

And so the cycle continues.