Thirteen months ago Munster took their best shot at Toulouse in the Champions Cup, but ultimately came up short.

The French side were simply too good for Johann van Graan's men in their Round of 16 meeting at Thomond Park in April 2021, winning 40-33 in a Champions Cup classic in Limerick.

A further season down the track, and both teams are a year older, and a year wiser.

Joey Carbery looks to be playing his best rugby since 2018, and it's no coincidence the province's attack has shone in recent weeks. There's also that extra bit of depth, players like Ben Healy, Craig Casey, Thomas Ahern and Josh Wycherley all growing into themselves as this season has progressed.

The same can be said for Toulouse, who followed up their win against Munster by going all the way and winning a fifth Heineken Cup, while completing the double by taking the French Top14 crown too.

But if there's one key difference to the take of the tape in the last 13 months: the return of spectators.

When Toulouse came to Limerick last year and outlasted Munster down the stretch, they did so against the echoes of an empty Thomond Park. On Saturday, there will be more than 30,000 - mostly Munster - fans to deal with.

With Ed Sheeran taking over Thomond Park this week, the province were left with no choice but to move their 'home' quarter-final to the Aviva Stadium, which they will also have to do should they reach a semi-final against Leinster next week.

But the fans look set to travel in their numbers, with the province confirming more than 31,000 tickets have been sold as of this morning, and Van Graan believes they can still tap into the home benefits even in the neutral setting of the Dublin.

"We believe this will go right to the very end. One other big difference this year is we have our 16th man, we have the red army travelling to Dublin," said Van Graan, who welcomed Andrew Conway (below) back from injury this week. 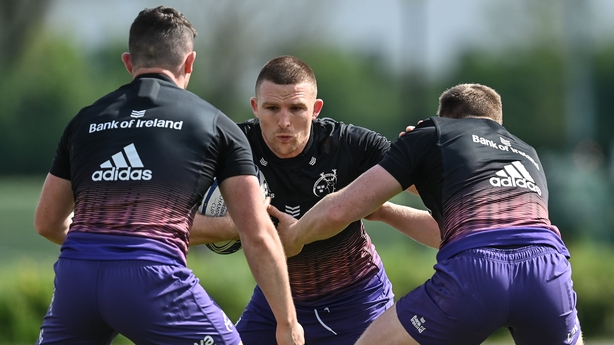 "It's already the second highest attendance for a Munster quarter-final in our history. We are banking on our 16th man to make a massive difference on Saturday in Dublin.

"It's a massive challenge for us. You play the reigning Champions Cup champions, the French Top14 champions, they've got 10 guys in that Six Nations team, Dupont has been the player of the Six Nations, and then if you look back in history Toulouse have won their last four games against Irish opposition in Ireland. That tells you the task ahead.

The defending champions have had a mixed season by their own standards with Ugo Mola's side currently sixth in the French top flight, albeit with just seven points separating the top seven teams in the league.

However they showed their class in the Round of 16 in Europe last month, overturning a seven-point aggregate deficit against Ulster to win the second leg 30-23 in Belfast.

And while Van Graan says he's wary of the threats posed by the five-time champions - specifically their half-backs Antoine Dupont and Romain Ntamack - Munster will be focusing their thoughts inwards.

"They've got a lot of power and weight and height in the forwards pack, with a proper setpiece," Van Graan added.

"Nine and 10 [Dupont and Ntamack] are world class, and then their broken-field attack, you can never switch off. They're a championship side, so our focus has mostly been on ourselves.

"They have so many threats that you do your preparation, but we want to keep improving on our side. We feel we've been playing some good rugby the last number of weeks, so the focus will be on ourselves. It's a massive challenge ahead.

"The only thing we can do is focus on ourselves and look at what we need to do. We need to make sure we have our defence spot-on, make sure that we keep the ball in hand when we have it, and then the broken field will be huge.

"Then we have to adapt to the referee; those power battles are huge in both teams in the 22, so what you do in the middle of the pitch with your discipline will be big, big points in the game."

Listen to Munster v Toulouse in the Champions Cup quarter-finals on RTÉ Radio 1 on Saturday from 3pm with live updates on RTE.ie/Sport and RTÉ News app. 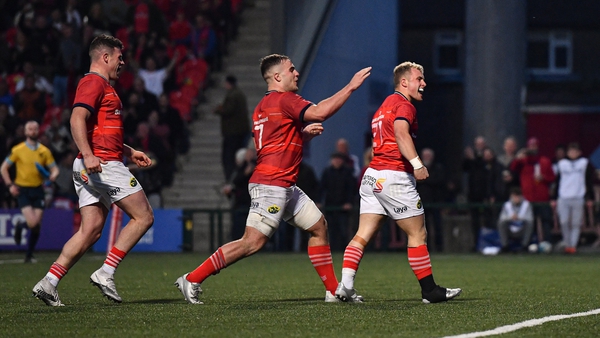