Munster head coach Johann van Graan says his side are battle-hardened as they head into the business end of the season.

The two-time European champions produced their biggest result of the when it was needed most on Saturday, as they overturned a five-point first leg deficit to beat Exeter Chiefs 26-10 on the day and 34-23 on aggregate, to secure a Heineken Champions Cup quarter-final against Toulouse.

Van Graan's side dug deep in the second half at Thomond Park, outscoring the Chiefs 16-0 in the final 30 minutes courtesy of a Damian de Allende try and a conversion and two penalties from Joey Carbery.

As well as securing Munster a record 19th Champions Cup quarter-final, it also halted their two-game losing run, having been beaten by Exeter at Sandy Park in the first leg, on top of their loss to Leinster earlier this month.

The big games are coming thick and fast for the province, who face a crucial United Rugby Championship trip to Ulster on Friday night, and the head coach says they appear to be coming out the right side of a difficult period.

"Yeah, look, to be successful you need to come through hard times and we've lost a few close ones over the last few weekends," Van Graan said. 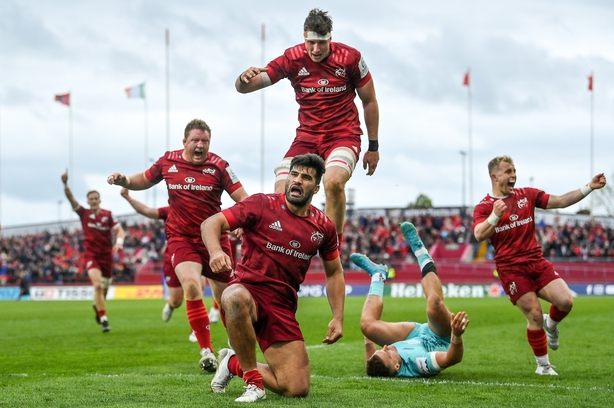 "Obviously the Leinster game didn't go our way but we kept just focusing on ourselves, going through our process which I felt we did really well.

"As I've said before, this team dreams big dreams and we've got big dreams for the season. In order for us to get through to a European quarter-final, stating the very obvious, we needed to come through today by more than five and we came through with 11, so we'll take 11.

"We spoke about knockout rugby, that takes a huge performance and we delivered that today."

His counterpart, Exeter director of rugby Rob Baxter, was gracious in defeat, saying Munster were full value for their win over the two legs.

And the Chiefs boss said despite the chaotic nature of their opponents' season, the energy at Thomond Park would suggest that reports of Munster's demise are slightly off the mark.

"Ah look, I think it's a fantastic place to play rugby. I think outside of the result - and we’ve lost here twice now - our players and our supporters enjoy coming to the city and they enjoy the games.

"So from our perspective it’s a great place to play rugby. Obviously from everybody else’s perspective, everything changes. 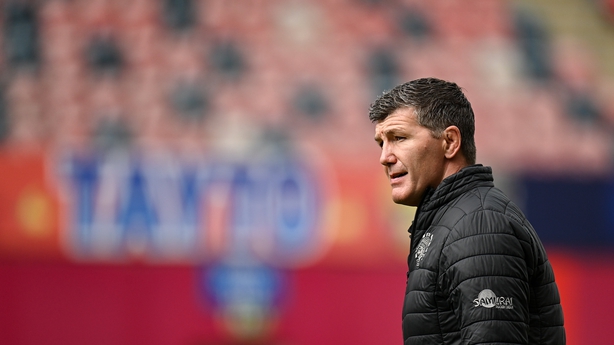 "Munster are a little like us. Once you win things it’s never good enough to not win them again. I’m feeling that now. We won the Heineken Cup and it never feels good enough to not win it again. The same with Premierships, once you’ve won them it never feels good if you don’t win them again and that’s probably where Munster are," Baxter (above) said.

Munster captain Peter O'Mahony was the inspiration behind Saturday's success, with the 32-year-old putting in one of his all-time great displays for the province.

But Van Graan was keen to stress the impact made by two of their less heralded players; John Ryan and Jack O'Donoghue.

With the quarter-final against Toulouse likely to be played in Dublin due to Ed Sheeran's takeover of Thomond Park, the Exeter win is set to be Ryan's final Champions Cup game in Limerick before he moves to Wasps in the summer.

"In terms of John Ryan, I remember when I just came to Munster I watched the [2017] quarter-final against Toulouse and he was man of the match that day," he added.

"He's a phenomenal scrummager and it was important all 23 players turned up today and delivered their best.

"And, you know, be good at the things that they'll specialise in and from a scrummaging point of view and performance John Ryan did that today. 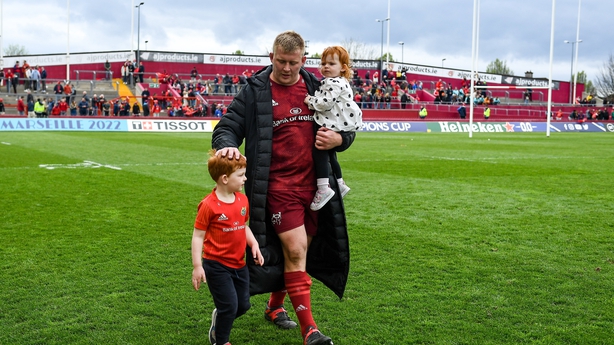 "f you think if you think back to 2018, Jack became captain for the first time against Cardiff away and he has grown a lot in terms of leadership," Van Graan said of O'Donoghue.

"And Jack always had a good work rate.

"One of the things that we spoke about is you need to become the best at something. His contesting it is up there with with Pete in terms of his lineout ability.

"His ball carrying abilities has improved so much, the lines that he ran and he carried with purpose today and then just in terms of his fitness. He literally elite she plays 80 minutes week in and week out.

"He's certainly got a lot of confidence currently.

"And again, he is one of those guys that he just seems to always be there. I've played him at seven before, played at eight now and he is a starter for us at number six."

Munster return to URC action on Friday against Ulster before hosting Cardiff in Cork a week later, with their quarter-final against the defending champions scheduled for the weekend of 6-8 May.

Van Graan kept his cards close to his chest when asked about whether injured internationals Andrew Conway, Tadhg Beirne and Dave Kilcoyne would be in line to return for the next European outing, stating all three were "a week-on-week thing". 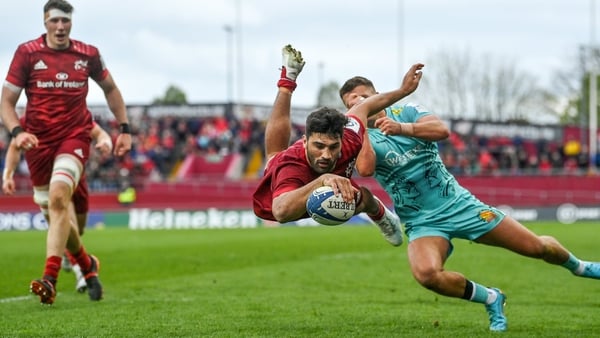 Munster rally to see off Exeter and reach quarter final