This was the first of three meetings between the sides in a four-week spell and the suggestion was that this URC clash was Connacht's best shot at a win.

But, with both sides missing their front-line internationals, Connacht shot themselves in the foot after just three minutes.

Leinster were temporarily down to 14 after the first play of the game when Tommy O’Brien was sin-binned for challenging Niall Murray in the air from the kick-off.

After initially calling a penalty only for a no-wrap tackle, referee Chris Busby had no choice but to red card the Connacht back upon review with the TMO.

Daly apologised to Frawley on his way off, waved a mea culpa to the Clan Stand and sank off the pitch under the disapproving eye of head coach Andy Friend.

The Australian had targeted a minimum of four wins from their five remaining regular-season games and he knew they had given themselves a huge mountain to climb.

Their first-half bounce back seemed to suggest that they could indeed pull off a shock and Tiernan O’Halloran’s try at the end of the half put them ahead, however, Leinster’s class showed and they ran in six second-half tries to claim all the points and extend their lead at the top of the table. 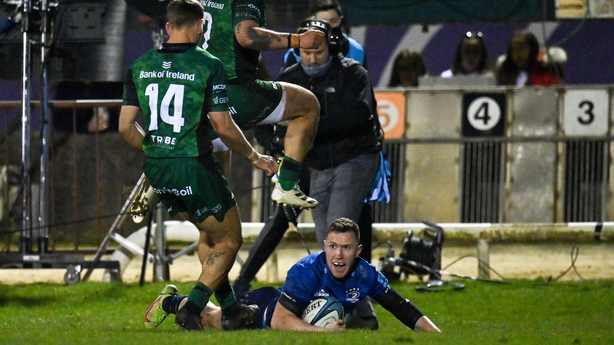 With trips to Italy and South Africa to come, Connacht remain in tenth place in the standings and will do well to make the play-offs.

It was also an ominous sign of what may be in store for the Westerners, who will host the four-time European champions in two weeks' time, with Leo Cullen being able to call on a large number of Ireland starters for that Champions Cup double-header.

Leinster got the first try of the evening in the 14th minute when Rory O’Loughlin finished smartly on the outside after a sustained barrage on the Connacht line.

Ross Byrne, who was replaced by Connacht-bound David Hawkshaw in the 38th minute, converted but from there until the end of the half it was the hosts who had the better of the play, holding their own or better in the scrum and playing their way out of trouble with quick hands and unlikely offloads.

A Jack Carty penalty got them on the scoresheet with 22 minutes gone and they could have more had one or two passes went to hand with the Leinster defence scrambling.

But their play got the score it deserved just before the break when a number of breaks close to the line sucked the Leinster men in before Carty swung an inch-perfect pass out to O’Halloran who dived over to give the hosts an 8-7 lead.

Connacht lead at the break with Tiernan O'Halloran finishing off a super attack #CONvLEI live on @RTE2 @RTEplayer and here https://t.co/H1RxA2NRel pic.twitter.com/D3isYrgUC1

That was as good as it got for Friend’s men, who had been beaten 47-19 earlier in the season by the holders.

Connacht held Leinster at bay for the opening ten minutes of the second half but after earning good field position, couldn’t secure a lineout. That signalled the start of a Leinster surge and they scored four tries in 14 minutes, putting the game out of reach.

Hawkshaw, who also kicked four conversions, was on hand to finish well under the posts after Rhys Ruddock’s break made space in the 53rd minute and Luke McGrath took advantage of Ultan Dillane’s spill in the midfield four minutes later.

Man of the match Frawley picked up a loose ball when John Porch fumbled close to his line and the result was beyond doubt.

Tommy O’Brien rounded his man on the outside after being put away by an audacious offload by Frawley, who had received a HIA in the first-half separate to the collision with Daly.

Just back from a five-week lay-off for a face injury, it was not what the Skerries man needed, not that he let it show.

Max Deegan jammed over for Leinster’s sixth, which was given after a TMO check, while Tommy O’Brien finished off the scoring with a 30-yard effort as hapless Connacht ran out of steam. 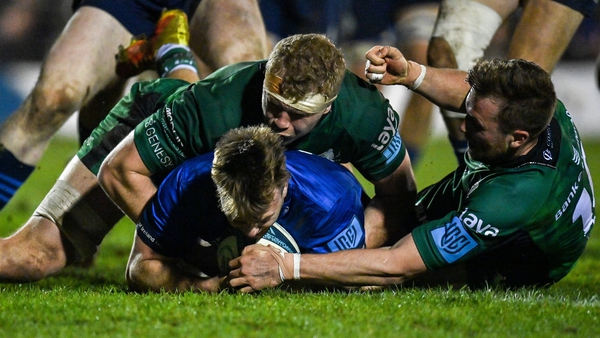