Tom Daly looks set to return from a 15-week lay-off for Connacht in this Friday's United Rugby Championship interpro against Ulster.

The centre hasn't played since the corresponding derby at the Aviva Stadium on 23 October after suffering a knee injury.

It's likely Daly will swap straight into the team in place of Tom Farrell, who is being assessed for a foot injury picked up in Saturday's demoralising 42-20 defeat to Glasgow at the Sportsground.

Daly is one of four players available again following injury, with centre Peter Robb and utility back John Porch also back in full training.

Out-half Conor Fitzgerald could return to the number 10 shirt having missed last week's defeat due to illness, with 20-year-old Cathal Forde making his debut in Saturday's loss.

"If there was a shining light or a positive out of it, one was his performance as a debut."

Denis Buckley is likely to step up into a starting role this week, having made his return from the bench last week after an eight-month absence, with Connacht dealing with a severe injury crisis in the front row.

Finlay Bealham is in Irish camp, while fellow tightheads Jack Aungier and Dominic Robertson McCoy continue to be sidelined with respective rib and hamstring injuries, although Aungier could be recovered in time to face the Scarlets on 19 February.

Meanwhile on the loosehead side, Matthew Burke remains out with the knee injury he picked up against Leicester, with the province estimating his return is still "a few weeks" away.

After falling to a fifth defeat from nine games this season in the URC, Connacht are now nine points off their nearest Irish rival, ramping up the pressure ahead of this Friday's derby at Kingspan Stadium.

On Saturday, the head coach was scathing in his assessment of the performance against Glasgow, and the Australiuan says he's seen a big response in training this week.

"We actually saw a response yesterday afternoon, we put it to bed yesterday morning," he added.

"We had a lengthier than usual team meeting. The players are good, they get it and own it.

"Things are presented to them, conversations were had and we've parked it as of about 10 o'clock yesterday morning. What we saw today is a much more energised team, what we're used to seeing.

"We are very aware of here we currently sit and the fact that we need to have wins. if we don't win on the weekend, we'll make it even trickier.

"If we do, we keep ourselves alive and kicking. We're honestly not looking beyond this game but we're aware the last performance was nowhere near where we want it to be." 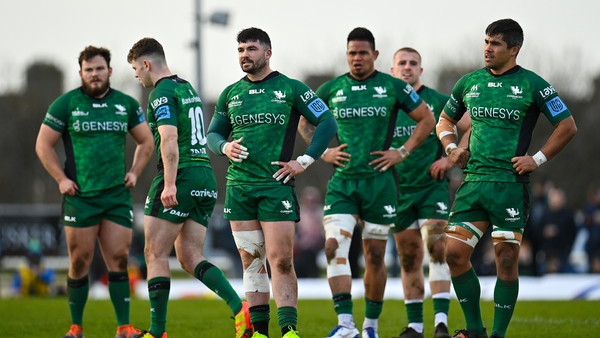