Rob Lyttle will make his 50th Ulster appearance when they host the Scarlets on Friday evening in the United Rugby Championship.

The left wing will start alongside Ethan McIlroy, who makes a positional switch to full-back, while Craig Gilroy comes in on the right.

Angus Curtis retains his starting berth at inside centre, and partners Ben Moxham in the Ulster midfield. Nathan Doak and Billy Burns will form the half-back pairing for the Kingspan clash (7.35pm).

John Andrew comes in to start at hooker, joining Eric O'Sullivan at loosehead and Marty Moore at tighthead prop.

Sam Carter pairs up with captain Alan O'Connor in the second row, while Greg Jones is selected at blindside flanker, Marcus Rea makes a positional switch to openside and Duane Vermeulen completes the base of the pack.

Gareth Milasinovich has returned from his short-term loan to Saracens and is named on the bench with Brad Roberts, Jack McGrath, Mick Kearney and David McCann to provide the forward options.

David Shanahan, Ian Madigan and Aaron Sexton are the back-line replacements for Dan McFarland's men, who sit third in the table on 26 points. 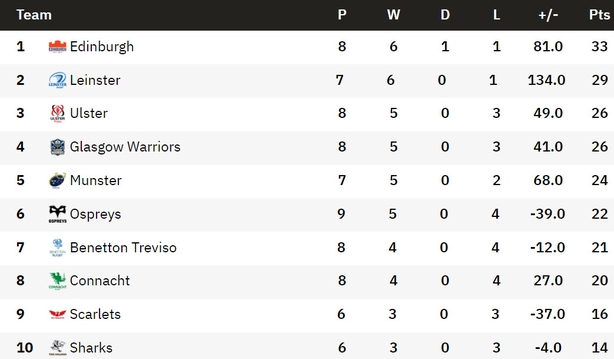