Simon Zebo will be available to play in Munster's Heineken Champions Cup pool game against Castres on Friday night, after escaping a ban following his red card against Ulster.

The wing was shown a red card by referee Mike Adamson 13 minutes into Saturday's 18-13 win at Thomond Park, after he was deemed to have made head contact with Ulster full-back Mike Lowry.

However, he now been cleared of wrong-doing by an independent United Rugby Championship disciplinary committee, who say his actions "did not result in foul play".

The panel agreed that the foul play had actually been committed by Munster out-half Jack Crowley who tackled Lowry at the same time as Zebo.

Munster down to 14 men against Ulster after Simon Zebo's red card - but only after referee Mike Adamson changes his mind after being talked around by the TMO. #RTERugby #RTESport #URC #MUNvULS

However, the out-half will not face any action, with the citing window closed.

"The Disciplinary Panel of Declan Goodwin (Chair, Wales), Frank Hadden and Sarah Smith (both Scotland) considered all of the evidence and camera angles available and concluded that the Player's actions did not result in foul play.

"In particular, on detailed examination of the video evidence, the Panel determined that it was No 10 of Munster Rugby (Crowley) who completes the tackle on Michael Lowry (No 15) of Ulster Rugby, with Simon Zebo only making minimal contact whilst wrapping his left arm.

"As a result, the player is free to continue playing this weekend," their statement concludes.

Zebo is now likely to be included in Munster's matchday squad for Friday night's Champions Cup visit to France.

On Monday, the 31-year-old, who rejoined Munster last summer following three seasons at Racing 92, signed a two-year contract to remain at Thomond Park until 2024. 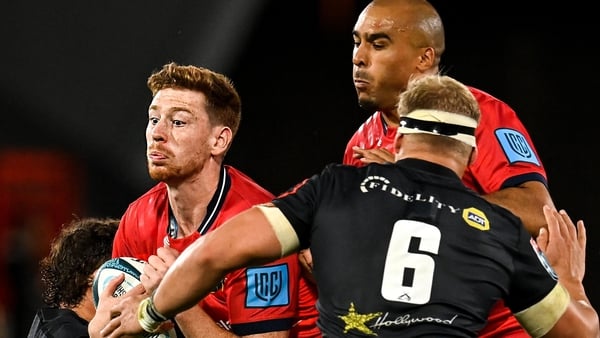