Stuart McCloskey admits that Ulster's defeat to Ospreys on Saturday took "some of the shine" off their victory over Leinster the previous weekend.

Dan McFarland's side fell to a 19-13 reverse in Swansea in round 7 of the United Rugby Championship.

After achieving a first win against Leinster at the RDS since 2013 at the end of last month, Ulster were desperate to back it up with victory against the Welsh outfit but despite dominating possession and territory were unable to make it count.

"It definitely took the shine off what we did against Leinster a bit," centre McCloskey told RTÉ Sport.

"The performance against Leinster, we wanted to make it a bit grittier, keep it tight, maybe go after them defensively and we had a different game plan against the Ospreys.

"We got into some quite good positions in the first half and we didn't capitalise when we got to within 10 metres of the line.

"That will be one of the work-ons this week to convert those chances. We definitely had some good pace of play before we got into the 22. We just couldn't seem to get over the line."

Up next for Ulster is a Champions Cup trip to Clermont, who sit sixth in the Top 14 and have won all bar one of their home games this season.

With opportunities for action with Ireland limited, McCloskey, who may line up against France back Damian Penaud if he is selected again in the centre, doesn't feel there is any added pressure on him to perform in these high-profile games.

"Not really extra pressure," added the 29-year-old, who has six Irish caps. "Penaud playing at 12, I haven't seen him play there too much. He’s not an out and out 12, I wouldn’t say, more of a winger.

"No, there’s no more pressure. I've played 40 odd games in Europe so I’ve been playing that top level for a while now. I’ll just go out and play my game." 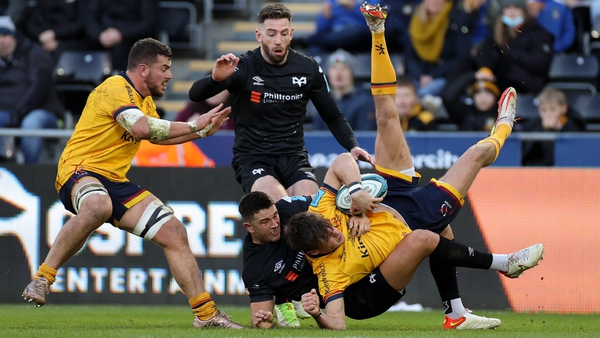