Connacht have ended Ulster's 100% record in the United Rugby Championship with an emphatic 36-11 bonus point win at the Aviva Stadium.

When you factor in the five-week break until the next round of United Rugby Championship matches, this was an important Connacht victory.

November often feels like it could last forever, and the prospect of spending 33 days dwelling on a record of one win from five would have made it a bleak few weeks out west.

Having ceded home advantage to bring the game to the Aviva Stadium in the hope of a large crowd, Andy Friend's side had put some pressure on themselves to perform.

They backed it up.

Watched on by 9,875 supporters, Connacht were consistently better than an Ulster side who struggled to find the form that had seen them pick up maximum points in their opening four games.

Mack Hansen continued his dream start to life at Connacht with two tries, the first after picking off a Billy Burns pass.

It was a night Burns will want to forget, Diarmuid Kilgallen picking off another intercept in the second half to add a bonus point, with Niall Murray and John Porch also crossing in the five-try win.

Things you love to see 😍

The hits were coming in quantity and quality early in the game, and it was no surprise that tempers flared inside four minutes.

John Porch had won a brilliant penalty under his own posts, poaching the ball from an Iain Henderson carry before the pushing and shoving started, notably featuring opposing tightheads Finlay Bealham and Tom O'Toole. 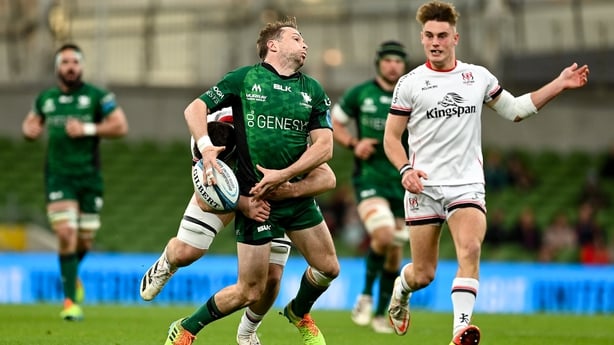 Referee Andy Brace deemed Connacht's players had instigated it, turning the penalty over, and an easy three-pointer for Nathan Doak to tap over.

Connacht were without the injured Bundee Aki, but his replacement Tom Daly was proving more than capable of filling his boots as a midfield enforcer, and he played a major role in the evening's opening try on 13 minutes.

After carrying hard down the left side of the pitch, Daly got his hands on the ball a second time within a couple of phases, this time passing outside to number eight Paul Boyle, whose offload in the tackle found Niall Murray, and the second row stretched his legs from 22 to tryline, for his first for the province. 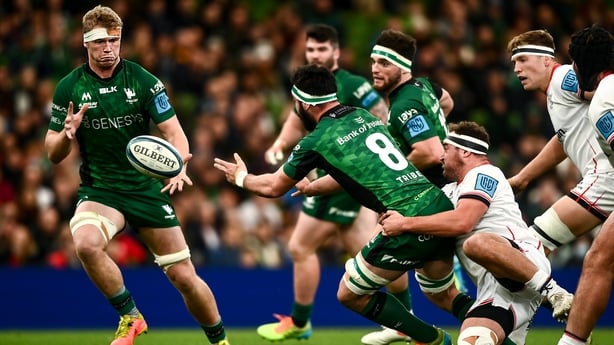 Carty's conversion was simple and he tapped over to make it 7-3, but the 'home' side's lead was cut on 17 minutes, when another Doak penalty made it a one-point game.

After naming his November Test squad earlier in the week, Ireland head coach Andy Farrell was an interested spectator at the Aviva Stadium, analysing some of the players he picked, as well as some he passed on.

One of those who was left out of his squad was Ulster outhalf Billy Burns, whose lapse in concentration allowed Connacht in for their second try.

With Stuart McCloskey switching in as first receiver, Connacht's Hansen shot right up in defence, reading what was about to happen. McCloskey flicked back towards Burns, who threw the ball straight into the waiting Hansen, and the Australian wing was never going to be caught, coasting under the posts, as Carty's conversion made it 14-6. 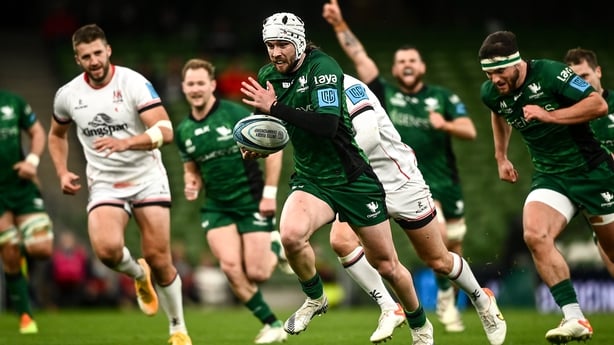 Andy Friend's side were humming by now, and three minutes later Carty extended the lead to 11 points with a penalty, after Tiernan O'Halloran's break caused the scrambling Ulster defence to veer offside.

Connacht were controlling the scoreboard, but were fighting to keep their double-digit lead; Nathan Doak's long-range penalty curling wide, before an excellent counter-ruck from Dave Heffernan and Matthew Burke led to a big turnover when Ulster were threatening the Connacht line.

Referee Andy Brace had put his 50p coin on the table in the opening minutes when he turned over Connacht's goal-line penalty which resulted in Ulster's opening penalty, and to his credit he stayed consistent just under 30 minutes later.

Connacht's Heffernan and Boyle had lifted Ulster captain Henderson above the horizontal to concede a penalty, before Henderson's second-row partner Alan O'Connor charged into the melee shoulder-first. Penalty turned over, and a yellow card to O'Connor. 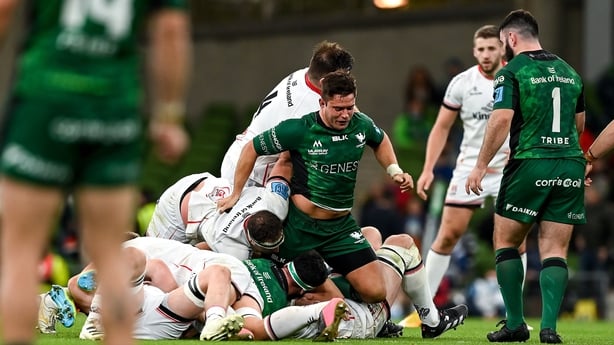 However, Connacht couldn't take advantage, and just three minutes later their numerical advantage was gone, when Ultan Dillane was sin-binned, a result of persistent team-indiscipline.

The early stages of the second half were largely played in Ulster territory. McFarland's side found themselves pinned back after some excellent kicking from Carty, but they were just about keeping Connacht at bay, holding up Paul Boyle over the line, before seeing a Carty penalty drift wide.

As the clock hit 60 minutes, Ulster finally crept into the Connacht half, but a Paul Boyle jackal closed that door. Penalty Connacht, as Carty kicked them back down to the Ulster 22.

Five minutes later, Connacht were out of sight. 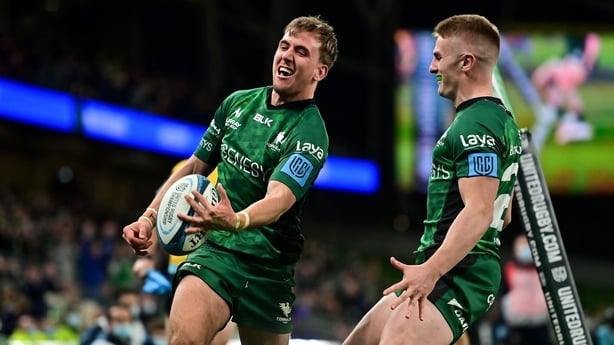 Their third try was down to simple handling; draw the man and pass. Jarrad Butler picked at the base of a scrum and passed to Marmion, Marmion brought in Carty, Carty fed Hansen, Hansen gave it to Conor Fitzgerald, Fitzgerald zipped it to Porch, and the Australian dived over in the corner. Simple and devastating.

On 67 minutes they hit the bonus point, Diarmuid Kilgallen the recipient of a second Billy Burns intercept pass, and the 21-year-old Galwegian raced home to the try-line, as Carty's conversion made it 29-6.

Almost straight from the restart they handed Ulster a lifeline, a penalty which the away side kicked to the corner, before they mauled their way over for their first try of the game, courtesy of Brad Roberts.

Lowry's missed conversion left the score at 29-11, and while Connacht were safe in their win, their continued issues around restarts will be something Friend will be keen to work on, in their five week break.

There was still time for Hansen to score his second of the day and fourth in five games, as he coasted clear of a depleted Ulster defence with the final play of the game.