DHL Stormers second row Adre Smith has been cited for an alleged bite on Munster's Niall Scannell in their United Rugby Championship meeting on Saturday.

The lock is alleged to have bitten the Munster hooker as the pair grappled on the ground in the 45th minute, in the lead-up to Munster's second try in their 34-18 win at Thomond Park.

Scannell made the allegation to referee Andy Brace immediately following the incident, but the TMO was unable to find any clear video footage.

However, captain peter O'Mahony could be heard telling Brace of a bite mark on Scannell's leg, while after the game head coach Johann van Graan said they would be following up on the incident through the official channels.

In a statement released this evening, the United Rugby Championship said: "A Disciplinary Committee will meet on Thursday, 7 October to consider the citing complaint against Adre Smith (No 4) of DHL Stormers which occurred against Munster Rugby on Saturday, October 2.

"The incident occurred in the 45th minute of the United Rugby Championship Round 2 fixture at Thomond Park. The Citing Commissioner in charge has made a complaint about an alleged act of foul play against an opponent Niall Scannell (No 2).

"The Player has been cited under Law 9.12 - A player must not physically or verbally abuse anyone. Physical abuse includes, but is not limited to, biting, punching, contact with the eye or eye area, striking with any part of the arm (including stiff-arm tackles), shoulder, head or knee(s), stamping, trampling, tripping or kicking."

If found guilty of biting, Smith could face a minimum of 12 weeks suspension (before mitigation), with the medium and high entry points set at 18 and 24 weeks respectively. 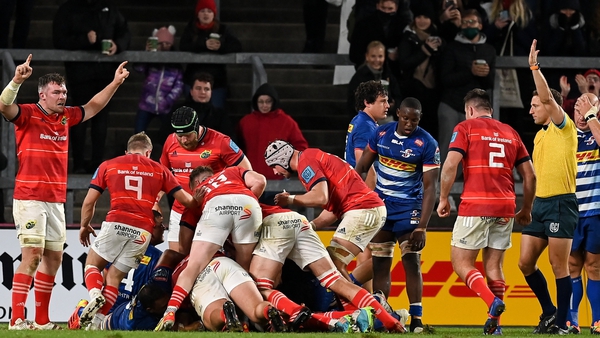