Ulster recorded a second successive bonus-point victory in the United Rugby Championship as they saw off Zebre 36-3 at Stadio Sergio Lanfranchi.

It was a far from vintage performance by the visitors, but they were still way too strong, scoring 26 unanswered second-half points.

Wing Ethan McIlroy and flanker Nick Timoney led the way with try doubles, while there were also touchdowns for full-back Will Addison and centre James Hume, with half-backs Billy Burns, Nathan Doak and Mike Lowry each kicking a conversion.

Zebre managed an Antonio Rizzi penalty in reply, but they were a distant second best despite Ulster never hitting top gear.

Zebre could not get an attacking look-in, and Ulster went close to opening their account when prop Tom O'Toole pushed for the line, but he was held up short.

Ulster, though, only had to wait another two minutes to go ahead, with pressure being rewarded as McIlroy squeezed over in the corner to open up a five-point advantage.

It proved a tough opening quarter for Parma, who saw captain Giulio Bisegni go off injured and be replaced by Rizzi.

Both sides were far from mistake-free as a scrappy first half unfolded, and Zebre cut their deficit seven minutes before half-time when Rizzi kicked a penalty.

It was a warning sign for Ulster as Zebre grew in confidence ahead of the break, but the visitors struck with a high-class second score. 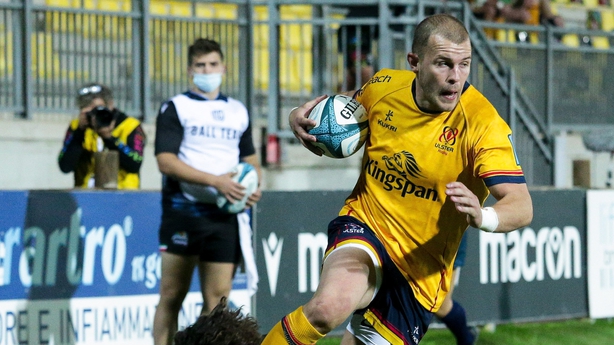 Hume was the architect, cleverly holding the ball up as he drew in Zebre's final attacker before sending an unmarked McIlroy over to complete a double.

Burns missed the straightforward conversion attempt - which summed up a patchy first 40 minutes for Ulster - but they still led 10-3.

Ulster began the second period camped in Zebre's 22 as they looked to extend their lead, and that overwhelming control was rewarded through a try when wing Craig Gilroy sent Addison over, with Burns converting.

Zebre found themselves in all kinds of trouble, and they fell further behind after replacement prop Ion Neculai was yellow-carded when Addison made a telling attacking thrust and Hume finished off for the bonus-point try.

Maxime Mbanda followed Neculai to the sin-bin, and Ulster immediately struck as Timoney dived over and Doak added the extras, and he completed a double two minutes from time.