Novak Djokovic made a triumphant return to the court in his first match since he was denied entry into the Australian Open due to not being vaccinated against Covid-19.

The world number one, playing competitively for the first time in 2022, beat Italian teenager Lorenzo Musetti 6-3 6-3 at the Dubai Tennis Championships.

Last week, Djokovic told the BBC he would not defend his Wimbledon or French Open titles if the tournaments require mandatory vaccination for competitors.

But entrants to Dubai do not need to be vaccinated, so the 34-year-old was able to return to a tournament he has won five times.

Despite his enforced absence, Djokovic showed he has lost none of his speed around the court with a stunning drop shot at the net on his way to breaking for 3-1 in the opening set.

Musetti, a rising star who took two sets off Djokovic at last year's French Open, forced three break points in the next game but the Serbian repelled the lot.

Djokovic regularly gave his young opponent a thumbs-up for some of his exciting stroke making.

But the 20-time grand slam champion, well supported by a packed crowd, kept his focus to break early in the second on his way to an ultimately-comfortable win in an hour and 13 minutes.

After giving his traditional 'heart throwing' celebration to all four grandstands, Djokovic said on court: "I couldn't ask for a better reception.

"It's been a while since I played and I couldn't think of a better place to kickstart the season. Thank you for the reception and welcoming me on court the way you did.

"All in all it's a straight-sets win so I have to be satisfied with my tennis, especially after not playing for two and a half months.

"Of course there were moments when I made unforced errors but it's normal to expect that in your first match in a while.

"But I'm glad I managed to finish the job off in straight sets against a very talented player who possesses a lot of quality. All in all, a very pleasant experience." 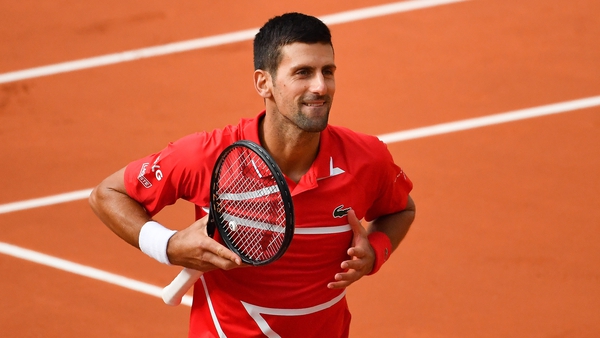