The world number one recovered from 5-1 down in the second set to clinch a 6-3 7-6 (7-2) victory over first-time grand slam finalist Collins and claim her third grand slam title.

She ends the long reign of 1978 champion Chris O’Neil as the last home winner of the women’s or men’s singles and, by maintaining her perfect record in slam finals, becomes the only active player other than Serena Williams to have won major titles on three different surfaces.

Having shrugged off the pressure to breeze through to the final, Barty had to use all her competitive instincts to overcome 30th-ranked American Collins, who brought the best out of her opponent in a terrific second set.

Barty now just needs the US Open to complete a career Grand Slam having won the French Open in 2019 and Wimbledon last summer.

Organisers were permitted to increase ticket sales to 80% of capacity and it was a terrific roar that greeted the arrival of Barty on court.

At 2-2, the home favourite found herself staring at a break point but whipped a forehand winner to save it and from there Barty, and the tense crowd, relaxed into the occasion.

A wild double fault from Collins on break point in the next game gave Barty the advantage, and the top seed was untroubled through the rest of the first set.

The 25-year-old’s serve is the foundation of her game, and she had been broken just once in six matches, but that became twice in the second game of the second set as Barty again paid for not landing more first serves.

Collins chose that moment to unleash one of her trademark yells of 'Come on’ towards her team, and there was another when she saved two break points in the next game.

The 28-year-old was into top gear now and producing the first-strike tennis that carried her to a swift semi-final victory over Iga Swiatek, who said afterwards that Collins’ ball was the fastest she had faced.

That was very likely a factor in the two double faults that saw Barty broken again to trail 5-1, although she retrieved one of the breaks in the next game to lift the anxious crowd.

Collins was two points away from the set at 5-3 30-0 but back came Barty, with the American earning boos for asking the umpire to appeal for quiet during points.

Heading into the tie-break, Barty knew this was the moment to strike and she surged into a 6-2 lead before passing Collins and letting out a huge roar of delight and relief.

Fittingly, Barty received the Daphne Akhurst Memorial Cup from her mentor, Evonne Goolagong Cawley, who won the title four times in the 1970s

Taking the microphone, Barty said: "First and foremost I have to say congratulations to Danielle and your team. I know you'll be fighting for many more of these in the future.

"To my team, wow. I said numerous times I’m so lucky to have so many people here that love and support me. We started right together from the start in the second part of my career. I love you guys to death, you’re the absolute best in the business.

"As an Aussie, the most important part of the tournament is being able to share it with so many people. This crowd is one of the most fun I’ve ever played in front of.

"You brought so much joy, you relaxed me and forced me to play my best tennis. This is just a dream come true for me and I am so proud to be an Aussie."

Collins paid tribute to Barty in a classy runners-up speech, saying: "First I think I owe a big congratulations to Ash on a phenomenal two weeks and a phenomenal couple of years.

"I really admire you as the player you are and the variety in your game, hopefully I can implement some of that in mine.

"I have a lot of people to thank – everyone who came to support me these past two weeks, we all met by chance and are now friends for life. It means the world to me." 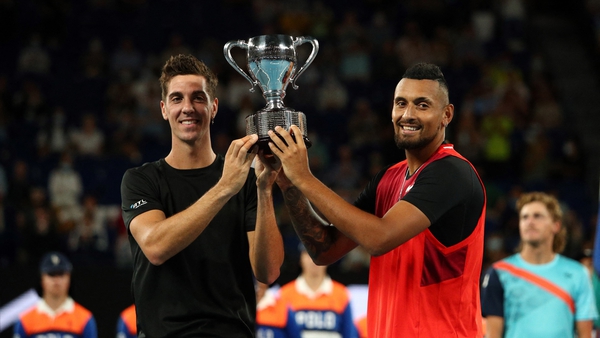