World number two Daniil Medvedev swept aside Botic van de Zandschulp 6-4 6-4 6-2 to reach the fourth round of the Australian Open and stay on track for a second successive grand slam.

Van de Zandschulp, ranked 57th in the world, was the only player to take a set off the Russian when the pair met at last year's US Open, which Medvedev went on to win for his first major title.

Medvedev, the highest-ranked player remaining in the men's draw due to the absence of Novak Djokovic, made it look easy, breaking his opponent's serve four times in the match to win under two hours at the Margaret Court Arena.

The 2021 Melbourne Park finalist will meet either Australian wildcard Christopher O'Connell or American Maxime Cressy for a place in the quarter-finals. 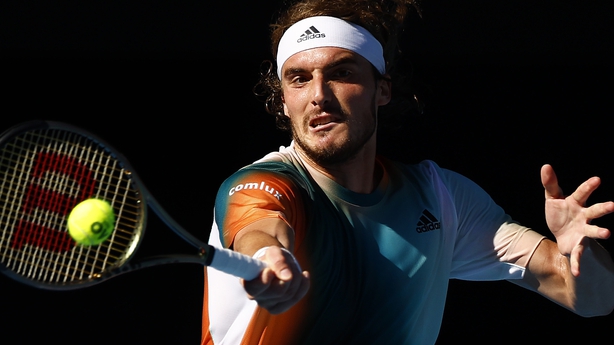 Stefanos Tsitsipas joined Medvedev in the fourth round after staving off the incendiary Benoit Paire with a tough 6-3 7-5 6-7(2) 6-4 win - but appeared not to realise the game was over after converting match point.

Paire dunked a forehand into the net on the first of three match points when serving to stay in the contest, but fourth seed Tsitsipas walked to the back of the court rather than approach the net.

The Greek turned around at the baseline with a look of surprise on his face, before walking forward to acknowledge Paire.

"I'm pretty glad with that win, Benoit is someone I say is one of the biggest stars in our game," said Tsitsipas, a former semi-finalist at Melbourne Park.

Having held Paire at bay at Rod Laver Arena, Tsitsipas crumbled in the third set tiebreak to let the Frenchman back into the match.

Paire kept in touch to 4-4 in the fourth set before conceding the match points with a double-fault.

Tsitsipas will meet American Taylor Fritz in the fourth round.