American Amanda Anisimova saved two match points and smashed winners at will to beat reigning champion Naomi Osaka 4-6 6-3 7-6 (10-5) in the third round of the Australian Open.

Osaka, who has won all her major titles on hardcourts, had two opportunities to close out the match in the 10th game of the deciding set.

But she watched helplessly as the 20-year-old Anisimova, who has seen her ranking plummet to 60th in the world due to injury issues, saved both and then converted her first opportunity in the deciding super tie-break with an ace to seal the match.

The American dropped her racquet and hid her face with her palms as the crowd at the Margaret Court Arena exploded in appreciation.

Anisimova, who reached a career-high ranking of 21 in 2019, threaded 46 winners in the match, while Osaka could manage only 21. 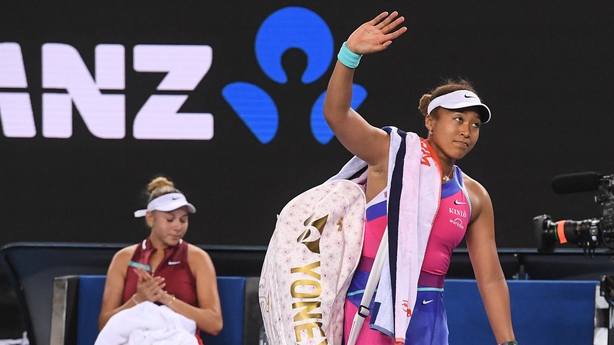 "Going into this match I knew I had to be playing sharp if I wanted to give myself a chance," the American said on court.

"Naomi is always going to be playing well, she's an absolute champion, so I knew that I really had to step up my game and try to be aggressive.

"I think that's what I started doing in the second set. Honestly, I'm so grateful that I was able to play so well today and get this win, it means a lot."

Ash Barty cantered past Camila Giorgi in just over an hour to set up a fourth round tie against Anisimova.

The world number one, who is aiming to end Australia's 44-year wait for a homegrown champion, was in dominant form in her 6-2 6-3 victory over the Italian on Rod Laver Arena.

After an early break, the 25-year-old Wimbledon champion fended off three break points to go 5-2 up in the opening stanza and then broke Giorgi to seal the set.

A break for 4-2 put Barty in charge of the second set and three games later she was bathing in an ovation from the centre court crowd having secured her place in the last 16 at Melbourne Park for the fourth straight year.

"I thought tonight was really clean, I looked after my service games really well," said Barty.

"I was able to keep the momentum going, make returns when it mattered most at the important moments, pretty good performance I think."

In-form world number six Paula Badosa had to fend off a comeback from Ukrainian teenager Marta Kostyuk in an arm wrestle of a baseline battle to reach the fourth round for the first time.

Badosa had to fight right until the very last point but finally secured the 6-2 5-7 6-4 victory on her fifth match point after two hours and 19 minutes in the Melbourne sunshine, extending her winning streak to eight matches.

"Marta's an insane player and I think she was playing top five level today," the Spanish eighth seed said of her 19-year-old opponent.

"She'll soon for sure be one of the best players in the world. I gave it all today, I had to because she was playing so good."

Badosa looked to be cruising at a set and a break up on Margaret Court Arena when her talented opponent found her range and clawed her way back into the contest.

The pair, wearing identical outfits, traded ferocious stroke for ferocious stroke from the back of the court and some of Kostyuk's shots, particularly her crunching backhands, belied her ranking of 66th in the world.

The Ukrainian's accuracy betrayed her at crunch moments, however, and she managed to convert only five of 15 break points over the contest.

Badosa also had her moments on key points and will want to quickly forget her fluffed attempt at a simple volley at the net on her second match point which ended up flying well wide of the tramlines.

The 24-year-old had cruised through the first two rounds at Melbourne Park for the loss of only seven games, riding the momentum from a tournament win at the Sydney Tennis Classic last weekend.

She will next face the powerful American Madison Keys, who won the WTA Tour title in Adelaide last weekend and moved through to the last 16 by winning a deciding tie-break against Wang Qiang to advance 4-6 6-3 7-6 (10-2).

Fifth seed Maria Sakkari eased to a 6-4 6-1 victory over Veronika Kudermetova and will face Jessica Pegula next.

The 2012 and 2013 champion is having her best run in Melbourne for six years and was in excellent form in beating long-time top-10 star Elina Svitolina 6-0 6-2.

Azarenka next faces fourth seed Barbora Krejcikova, who recovered from a set and a break down to defeat another French Open champion in Jelena Ostapenko 2-6 6-4 6-4.

Krejcikova was unhappy to receive a warning for taking too long over a bathroom break – a rule introduced following the furore at the US Open that surrounded Stefanos Tsitsipas' lengthy departures from the court. 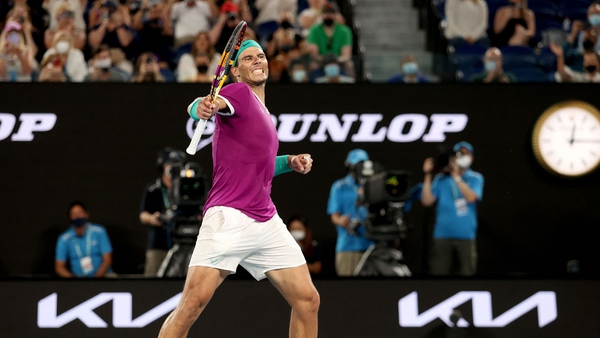