Daniil Medvedev branded a section of the Australian Open crowd "low IQ" after defeating home hope Nick Kyrgios in the second round in Melbourne.

The meeting between the Australian showman and the world number two and title favourite was the biggest match of the tournament so far and it lived up to its billing on a raucous Rod Laver Arena.

The Russian was especially unhappy with fans making noise between his first and second serves, with Cristiano Ronaldo's 'siuu' chant again making its presence felt at Melbourne Park.

Speaking to Eurosport, Medvedev said: "It’s not everybody who’s doing it, but those who are doing it probably have a low IQ."

In his press conference later, the second seed said: "I enjoyed to win. It’s not easy to play against the crowd. I feel like these matches, they are not easy to play, but they stay as fun matches afterwards, because in the end we gave the crowd a big show. Probably Nick more because he’s a big entertainer."

Kyrgios agreed with Medvedev about the noise between serves, but said: "I thought the atmosphere was awesome. That’s what sport is.

"You’ve got the most entertaining player playing in his home slam on Rod Laver. You’d expect the crowd to be like that. I can understand it’s a gentleman’s game but it’s about time that people embraced some sort of different energy in this sport, otherwise it will die out. It’s just that simple."

Regarding speculation that this could be his final year in the game, Kyrgios said: "I don't know what I’m going to be doing in a year’s time. I’m probably playing tennis, but I don’t know."

Andy Murray's tournament came to a disappointing end with a defeat in straight sets to world number 120 Taro Daniel - the lowest-ranked opponent to beat him at a grand slam event.

Hopes were high that Murray could have another strong run in Melbourne when he ground out a five-set win over Nikoloz Basilashvili in round one, three years after it appeared his career had ended on the same court.

But, back on John Cain Arena, the feeling was very different this time as Murray struggled for sharpness against a tenacious and mobile opponent and fell to a 6-4 6-4 6-4 defeat.

Daniel had won just five games over three sets in their only previous meeting in Davis Cup in 2016 but Murray, whose heavy workload also included reaching the final of the ATP Tour event in Sydney at the weekend, began sluggishly and was unable to turn the tide in his favour.

He had never lost to a player ranked outside the top 100 at a slam, with then world number 91 Arnaud Clement the previous lowest in the second round of the US Open back in 2005.

Murray was unable to hit through his opponent during the opening set and, although he retrieved an early break, Daniel quickly secured another one.

Four break points came and went in the second game of the second set - Murray took only two of 11 in the match - and again it was Daniel that came up with the answers at the big moments.

Murray did finally move ahead early in the third but surrendered his advantage straight away and the end was nigh when Daniel broke to lead 5-4.

Murray received a warning for slamming his racket angrily to the court, and Daniel clinched his second match point to move through to the third round of a slam for the first time.

Serving up a big win 👌 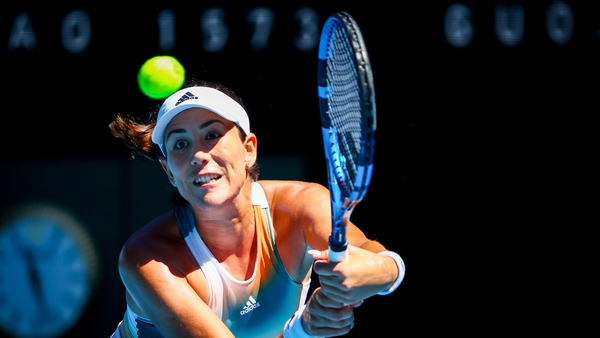