Despite a liking for the grass courts, Barty had never made it past this stage before, but she put that right with a 7-5 6-3 win on Court One.

The Australian will play the winner of Emma Raducanu and Ajla Tomljanovic's match later on Monday in the next round and will have strong hopes of adding a second grand-slam title to her collection.

Krejcikova is the current world number one in doubles, but she is making big strides in the singles as well as a spectacular few weeks came to an end.

The Czech won at Roland Garros last month having previously never made it past the fourth round at a grand slam and then made it to the second week at SW19, where she had never won a match previously.

But her 15-match winning run was brought to an end by Barty, who recovered from a slow start.

With a firing forehand, Krejcikova broke Barty’s serve to go into an early 3-1 lead.

Barty’s game soon arrived as she forced the break back, thanks largely to two Krejcikova errors to level at 4-4.

She began finding her range on the forehand and forced a set point in Krejcikova’s next service game before eventually getting the job done two games later, winning the first set 7-5.

The second set – and the match – was decided by a run of three break of serves, which Barty crucially got two of as she claimed the win in clinical fashion.

She said in her on-court interview: "It was a tough match. Barbora has had an incredible year, she has been one of the toughest players.

"I found some pretty good stuff when I needed it most which is great."

The Belarusian looked well in control when she took the first set, but 18th seed Rybakina crashed down six aces and made just four unforced errors to Sabalenka's 15 to level the match.

But Sabalenka won the last eight points of the match, forcing the crucial break for 5-3 and serving out to love to win 6-3 4-6 6-3.

Kerber has fond memories of the main show court at SW19, having won the title in 2018, and reminded everyone why with a 6-4 6-4 win over the teenage prodigy.

Twelve months after Kerber’s triumph, Gauff became the new sweetheart of Centre when she broke on to the scene as a 15-year-old and she has followed that up this year.

But she came up against an opponent who had the skill to absorb Gauff’s power and Kerber eased to a comfortable victory.

Ons Jabeur continued her brilliant Wimbledon run by coming from a set down to defeat seventh seed Iga Swiatek and reach her second grand slam quarter-final.

The Tunisian, who became the first Arab woman to win a WTA title in Birmingham last month, had already knocked out former champions Venus Williams and Garbine Muguruza and a 5-7 6-1 6-1 victory saw Swiatek added to the list.

The Pole, last year's French Open champion, became the seventh top-10 seed to fall after being outfoxed by the variety and skill of Jabeur.

Both women made nervous starts but especially Swiatek, who trailed 3-1 and 5-3 before fighting back to win the first set, emulating Jabeur against Muguruza by hitting a winner around the net post in the 11th game.

But Jabeur hit back strongly, finding her touch on her favoured drop shots but mixing them with fiercely struck forehands to keep Swiatek guessing.

Ultimately, the 20-year-old had no answer, and Jabeur matched her run at the Australian Open last year by making it through to the quarter-finals. 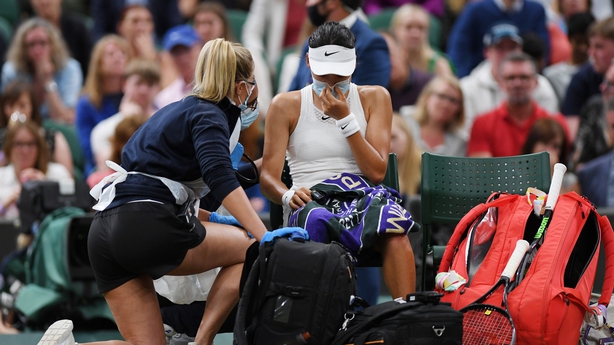 Emma Raducanu's brilliant Wimbledon run came to an end in the fourth round when she was forced to withdraw during the second set of her clash with Australia's Ajla Tomljanovic.

The 18-year-old, the youngest British woman to reach the second week at SW19 in the Open era, has become an overnight sensation and there were high hopes she could claim another win against 75th-ranked Tomljanovic.

But Tomljanovic withstood another barrage of power from the teenager to take the opening set 6-4 and move into a 3-0 lead in the second.

Raducanu had been noticeably struggling to breathe and, after consulting with the trainer and doctor, she took a medical timeout where it was deemed she could not continue