Andy Murray is through to the third round at Wimbledon after coming from two sets to one down in a dramatic Centre Court contest to defeat Oscar Otte.

The victory means the Scot has reached the third round of a grand slam for the first time in four years.

Not since the 34-year-old limped through to the Wimbledon quarter-finals in 2017, before his two hip operations and what he thought would be the end of his career, had Murray won two matches at a slam.

And it did not look likely to happen on Wednesday night when, labouring and frustrated, he saw a lead erased and the reversed by German qualifier Otte, making his Wimbledon debut.

But Murray has come back from more testing situations on the lawns of SW19 and, after a break for the roof to be closed, he found some of the old magic to win 6-3 4-6 4-6 6-4 6-2 and set up a third-round clash with 10th seed Denis Shapovalov.

The two-time champion had awoken memories of times past against Nikoloz Basilashvili on Monday, salvaging a four-set victory under the roof after blowing a seemingly insurmountable lead in the third.

The big question was how well he had recovered physically and, although he began a little gingerly, he settled into the match well, making few errors and showing Otte the way around a grass court.

Murray broke the big-serving 27-year-old twice and seemed to be well on his way to round three when he moved 3-1 ahead in the second.

But a loose service game, coupled with a more aggressive approach from his opponent, turned the match completely on its head.

Otte, who led Alexander Zverev by two sets to love in the first round of the French Open, won four games in row before serving out the second set, and it was a weary-looking Murray who was broken in the seventh game of the third.

The 34-year-old's movement lacked sharpness and too often his shots did not have sufficient weight behind them to put Otte under any real pressure.

The German had to wait for an ailing line judge to be replaced before serving for a two-sets-to-one lead, but it did not put him off.

There was a worrying moment for Murray and his many fans inside Centre Court when he became the latest player to slip in the second game of the fourth set, letting out a cry and clutching his groin.

But there did not appear to be any lasting damage and two games later the match was paused so the roof could be closed.

Against Basilashvili, the closing of the roof had helped Murray turn the match back in his favour and there were positive signs on the resumption as the Scot found a bit more pop on his shots and in his legs and broke for 4-2.

The cheers turned to groans when Murray was unable to serve it out at 5-3 but he showed once again that his competitive desire knows no bounds by breaking again to force a decider.

Murray's physical resurgence was encouraging, and Centre Court was on its feet again when he broke at the first opportunity in the fifth set.

There may not be many more opportunities for the Scot to experience such moments and he drank it all in as he survived several long service games and then clinched victory with a trademark lob.

The world number one produced a scintillating display against the South African in what was a repeat of the 2018 final at the All England Club.

A straight-sets victory proved enough for Djokovic to claim the title three years ago and he again made light work of the big-serving Anderson to progress into round three with a 6-3 6-3 6-3 win to set up a third-round match on Friday against Denis Kudla who overcame Andreas Seppi in straight sets.

Play got under way on Centre Court with the roof open and all eyes on the surface after Adrian Mannarino and Serena Williams had both suffered injuries following falls on the grass on Tuesday.

Djokovic had experienced issues with the conditions during his first-round win over Great Britain's Jack Draper and took his first tumble during the fifth game.

Another fall soon followed with the Serbian starting to simmer but it seemed to be the catalyst for the five-time singles' winner at this tournament to hit top gear.

Serve had dominated initially before Djokovic claimed 12 points in a row at 3-3 to take the opening set in 32 minutes with an exquisite forehand winner down the line able to clinch it.

It was not long before a third tumble occurred with the champion sprawled out on the floor and yet it could not deter his near flawless game.

The draw could have been kinder to the top seed, even with Anderson working his way back from knee surgery in 2020. It was only a few years ago when the right-hander reached the finals of the US Open and Wimbledon in 12 months.

But he had little answer to Djokovic's accuracy during a second set where the momentum switched quickly in favour of the 34-year-old favourite.

With Anderson having some difficulties on first serve, he was also being pulled in all directions by his opponent who claimed a decisive break with a wonderful backhand lob from the baseline.

The unforced errors were becoming frequent from Anderson and Djokovic secured the set with a second break after landing more shots at the feet of his 6ft 8in rival.

A couple of aces early into the third set hinted at Anderson finding his range but he continued to struggle at the net as the match started to slip away.

Yet another sumptuous cross-court winner earned a key break in the eighth game and another unforced error from Anderson helped Djokovic book his place in the next round. 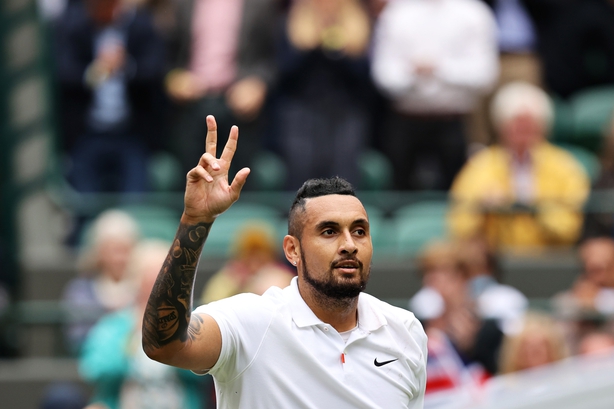 Elsewhere Australian maverick Nick Kyrgios marked his long-awaited return to action by completing a 6-4 4-6 3-6 6-1 9-7 win over Ugo Humbert in a match held over from the previous evening.

Play was suspended at 3-3 in the deciding set at 11pm on Tuesday after 21st seed Humbert had led by two sets to one.

But Kyrgios, one of the biggest draws in the sport, showed great composure to finish the job on Court One and set up a second-round clash with Italian Gianluca Mager.

"Not too bad for a part-timer," the 26-year-old Kyrgios, playing his first match since losing in the third round of the Australian Open in February having opted against travelling because of the pandemic, said on court.

"It didn't take much to get me off my couch when I heard there would be crowds here because I love Wimbledon."

A four-set victory for the Argentinian told only half the story with the Court 12 crowd treated to more than three hours of tennis.

Broady was able to create numerous break points against his opponent but closing them out proved the problem and the world number 11 progressed 4-6 6-2 6-1 6-4.

Earlier, Sam Querrey, who reached the semi-finals four years ago, claimed the scalp of Pablo Carreno Busta - the 11th seed - in straight-sets and 12th seed Casper Ruud was also dumped out after he lost in five to Jordan Thompson.

The 18th seed Grigor Dimitrov had less trouble against Spaniard Fernando Verdasco on his way to a 3-6 6-4 6-4 6-4 success and Lorenzo Sonego, seeded 23 at the Championships, also progressed with relative ease.

It was not the case for Aslan Karatsev (20) and John Isner (28), who saw their Wimbledon challenges end in the first round, but Marin Cilic and Taylor Fritz - the 32nd and 31st seeds respectively - made it through following straight-set wins.