Back on the hallowed Centre Court turf, the 34-year-old delighted his fans as he rolled back the years, producing vintage shot-making to lead by two sets and 5-0 in the third.

Basilashvili, the 24th seed, looked down and out but the drama had only just begun as Murray tightened up and his lead began to shrink.

Initially, it looked like being only a glitch but when two match points went begging as Basilashvili served at 3-5, Murray began to resemble a man with his arm set in concrete.

Tension filled the air as the crowd tried to lift the former world number one who lost seven successive games to send the match into a fourth set.

Basilashvili had recovered from two sets down to beat Britain's James Ward in the first round in 2019 and with nagging doubts about Murray's physical condition after playing only a handful of top-level matches this year a repeat looked possible.

With darkness descending over the All England Club, the players left the court while the sliding roof was closed and lights switched on to enable the match to be completed.

The interruption had a rejuvenating effect on Murray who returned to break serve to love in the first game of the fourth.

Basilashvili broke back immediately with a piercing backhand down the line but then dropped his serve to love again.

Murray had chances for a 4-1 lead in the fourth but Basilashvili dug in to stay in touch and the Georgian then had a break point to get back to 4-4.

But Murray saved that with a delicate drop shot and pushed hard to win the match on Basilashvili's next service game.

Basilashvili saved a third match point with a sweet winner but at the fourth time of asking Murray got the job done when his opponent sent a backhand into the net. 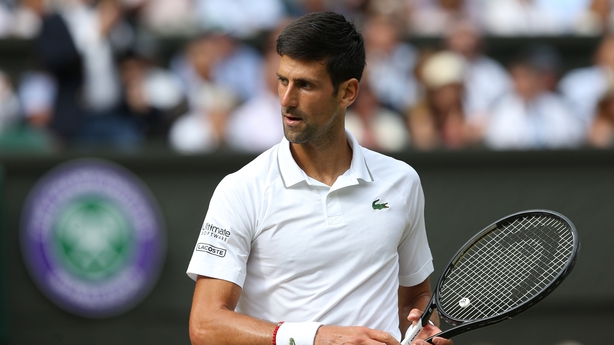 Defending champion Novak Djokovic overcame an early fright to fend off British teenager Jack Draper 4-6 6-1 6-2 6-2 and launch his quest for a sixth title at Wimbledon.

The first match on Centre Court since Djokovic's nailbiting victory over Roger Federer in the 2019 final - 716 days ago - was classic David versus Goliath material.

And while there was to be no fairytale Grand Slam debut for 19-year-old Draper, the match proved the perfect way to bring Centre Court back to life after the enforced silence due to the coronavirus pandemic.

Only 7,500 fans were permitted on Centre Court in line with the 50% cap on attendance, but they let out a mighty roar as Draper won his first point.

Djokovic has never lost a Grand Slam match to a player ranked as low as world number 253 Draper, but looked a little stunned as he struggled to find his footing on the greasy turf and contain the fearless hitting of the Briton. 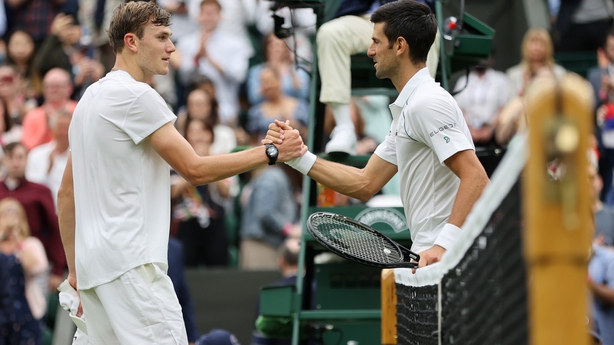 Grand Slam main draw debutant Draper broke serve in the third game and made a mockery of his inexperience as he saved all the break points he faced on his way to taking the opening set off the Serb contesting his 65th major.

Twice Djokovic found himself on his backside in the first set and with the roof closed because of the rain that delayed play on the outside courts, the stage looked perfect for a Wimbledon shock of monumental proportions.

But Djokovic is not a 19-times Grand Slam champion for nothing and the Serb quickly snuffed out the danger, levelling the match by dominating a 26-minute second set.

Any hopes Draper had of handing Djokovic his first opening-round defeat at a Grand Slam since 2006, began to evaporate when he completely missed an overhead to drop serve early in the second set, Djokovic roaring in relief.

Start as you mean to go on…@DjokerNole's pursuit of a third consecutive Wimbledon title is off to a winning start, beating Jack Draper 4-6, 6-1, 6-2, 6-2#Wimbledon pic.twitter.com/soTVGWBze4

From that point on it was straightforward enough for Djokovic who looked immaculate as he quickly got back into the old routine in his first competitive singles match on grass since saving match points to defeat Federer in two years ago.

"It feels great seeing everyone and being back on the most sacred tennis court in the world," Djokovic, who is bidding to land a record-equalling 20th Grand Slam title having won the Australian and French Opens this year, said on court.

"It was very sad last year that Wimbledon was cancelled but really glad the sport is back."

He also had kind words to say about Draper who had vowed to cause his illustrious opponent problems and remained true to his word in one scintillating set.

"He definitely deserves a round of applause," Djokovic said. "He was walking on to Centre Court for the first time and carried himself very well and backed himself."

It was his first match since losing the Paris final in five sets to Djokovic two weeks ago and meant his struggles at Wimbledon continued, having gone out at this stage for the third time in four visits to SW19. 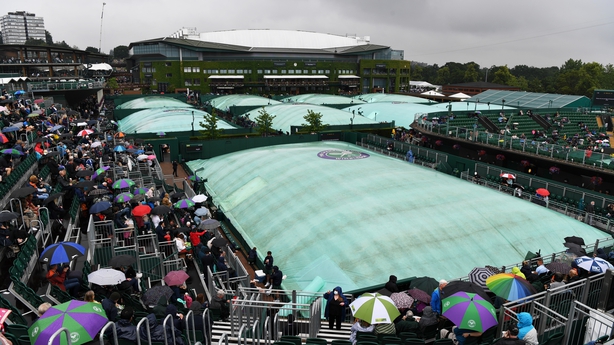