Grand slam player news conferences have been under the spotlight after Naomi Osaka announced she would skip them at the French Open and organisers put the hammer down on a reporter for asking a question from a supermarket before reinstating him after he apologised.

Japan's Osaka, the world number two, withdrew from the tournament amid the row that erupted following her decision as she revealed on Monday that she had been suffering from depression.

This year's news conferences are being held digitally and most of the accredited reporters are not on site.

One of them, who is known for his left-field questions, said he was "actually at the supermarket" when he was given his chance to speak to German Alexander Zverev.

It was a step too far for organisers who said that the reporter's credentials had been revoked for that reason before saying he was getting his accreditation back after apologising.

Asked about the incident after his second-round win over Russian qualifier Roman Safiullin on Tuesday, Zverev said: "He is a very nice guy. I hope he gets his media pass back. I don't want to be the reason why he lost his media pass.

"I think he did it more as a joke. But the other way around, I also do jokes sometimes that are taken the wrong way."

Zverev blew hot and cold with his serve but had enough artillery to take down Safiullin 7-6(4) 6-3 7-6(1) to reach the third round.

Zverev and Safiullin never contested a Tour-level match before Wednesday but met three times as juniors with the German winning all three in straight sets.

But the 182nd-ranked Russian, who mostly plies his trade on the challenger circuit, went toe-to-toe with Zverev in the baseline battle in the opening set before the German got the crucial break in the 11th game.

Serving for the set, Zverev committed two double-faults to give away the advantage and had another in the tie-breaker but he recovered to take the lead with back-to-back aces in the first match of the day on Suzanne Lenglen court. 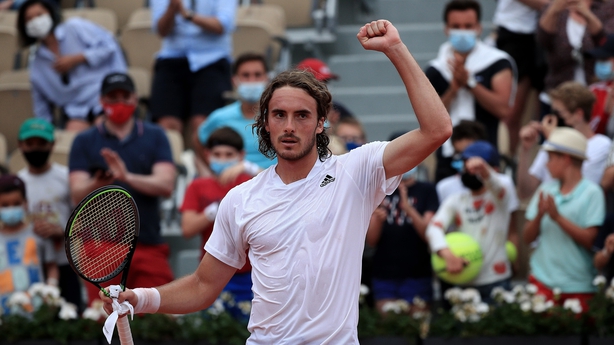 Elsewhere, Greek fifth seed Stefanos Tsitsipas strolled past Spaniard Pedro Martinez 6-3 6-4 6-3 in a scrappy contest on Wednesday to reach the third round.

Tsitsipas, who reached the semi-finals in 2020, is considered one of the main contenders to challenge the imperious Rafa Nadal for the title at Roland Garros after the 22-year-old's triumph at the Monte-Carlo Masters.

The 103rd-ranked Martinez gave a good account of himself during parts of the match but did not have enough in his locker to put significant pressure on Tsitsipas in their first meeting.

The Greek broke his opponent's serve eight times and hit his 45th winner on matchpoint to set up a third-round meeting against American John Isner, who defeated Serbian Filip Krajinovic 7-6(6) 6-1 7-6(5).