Naomi Osaka was fined $15,000 by Grand Slam organisers for skipping a news conference following her first-round win at the French Open on Sunday, and was also warned of possible expulsion from Roland Garros and future majors if she fails to meet her media commitments.

In the run up to the claycourt major, the world number two announced she would boycott news conferences while in Paris to raise awareness of players' mental well-being, saying the nature of questions from journalists is like "kicking a person when they are down".

Osaka started her French Open campaign with a 6-4 7-6(4) win over Romanian Patricia Maria Tig and then snubbed the post-match news conference, although the four-time Grand Slam champion did hold a court-side interview immediately after the contest.

The board of the four Grand Slams said in a statement on Sunday that the French Open organisers had asked Osaka to reconsider her position and tried unsuccessfully to speak with her to resolve the matter.

"The Australian Open, Roland Garros, Wimbledon and the U.S. Open jointly wrote to her to check on her well-being and offer support, underline their commitment to all athletes' well-being and suggest dialogue," the statement read.

"She was also reminded of her obligations, the consequences of not meeting them and that rules should equally apply to all players.

"Naomi Osaka today chose not to honour her contractual media obligations. The Roland Garros referee has therefore issued her a $15,000 fine."

Osaka's management did not immediately respond to a request for comment but the player published a cryptic message on Twitter.

"Anger is a lack of understanding. Change makes people uncomfortable," she wrote. The 23-year-old Japanese player, who lives in Florida, has never made it past the third round at Roland Garros and arrived in Paris having played only three matches on clay this season after early defeats in Madrid and Rome.

Osaka, who according to sports business website Sportico earned $55.2 million over the past 12 months, has previously used her platform and considerable media attention to highlight issues of police violence and racial inequality.

While announcing her decision on Twitter to boycott news conferences she said she hoped the "considerable amount" that she expected to forfeit as fines would go towards a mental health charity.

Rafa Nadal, a 20-times Grand Slam winner, and women's world number one Ash Barty have said they believe players have a duty to address the media.

Seven-time Grand Slam singles champion Mats Wilander said on Sunday that Osaka should not play tournament tennis until she is ready to take part in post-match news conferences.

"We have advised Naomi Osaka that should she continue to ignore her media obligations during the tournament, she would be exposing herself to possible further Code of Conduct infringement consequences," the board of the four Grand Slams added.

"As might be expected, repeat violations attract tougher sanctions including default from the tournament ... and the trigger of a major offence investigation that could lead to more substantial fines and future Grand Slam suspensions."

The board said it would be unfair to other players if Osaka refuses to face the press while others honour their commitments.

"We will see how everything will end up," two-time Wimbledon winner Petra Kvitova said after her win in the opening round.

"But me personally, I was always trying to follow the rules and be fair not only on the court but off the court as well. Now it's up to them to decide what's going to be."

Osaka showed no signs of being distracted by the issue during her opening match on a sun-bathed Philippe Chatrier court, however.

Asked in her courtside interview about how she adapts her game to the surface, Osaka said: "It's a work in progress. Hopefully the more I play the better I play."

"I'm really glad that I won. It's a beautiful court. I've only played two matches here (on Philippe Chatrier), one before the roof and one now, so hopefully I'll keep it going."

Osaka, who missed last year's tournament due to a hamstring problem, was not keen on engaging in long rallies and seemed too powerful against the 63rd-ranked Tig. 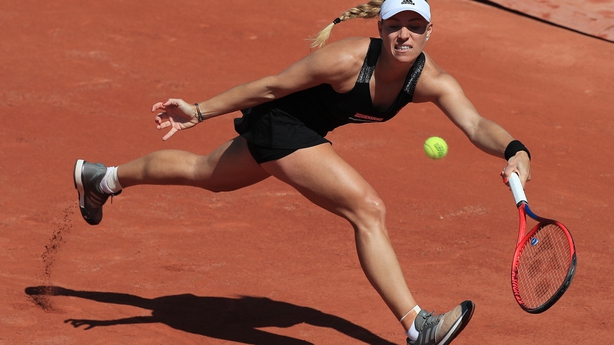 Former world number one Angelique Kerber's poor record at the French Open got no help on Sunday when the German was knocked out in the first round by Ukrainian qualifier Anhelina Kalinina.

In an indication that the 26th seed, who has never made it past the quarter-finals here despite winning the other three Grand Slams once each, is not a top name on clay, Kerber (above) was scheduled to play on the outside court 14.

She bowed out with a 6-2 6-4 defeat for her third first-round loss in a row on the Paris dirt.

"She started well and had nothing to lose, while it took me too long to get into the contest," Kerber said afterwards.

In her last six tries she has failed to make it past the opening round on five occasions.

Kerber is now eager to play on a surface on which she fares better.

"I will try to learn from the match now because I played good the last few weeks and I had good matches," she said.

"I did the best preparation I could do in the last few weeks on clay, but yeah, it's fine, and now I'm looking forward to Wimbledon for the grass court season, and it sounds much better for me, so I'm happy that the next Grand Slam is on grass." Third seed Aryna Sabalenka is one of the most in-form players in the draw and she overcame former top-20 player Ana Konjuh, who is working her way back from serious elbow problems, 6-4 6-3.

A compelling battle of former slam champions was won 6-4 2-6 6-3 by Victoria Azarenka against Svetlana Kuznetsova, who won the title in Paris back in 2009.

American Danielle Collins, who is back on tour after undergoing surgery for endometriosis, battled to a 6-2 4-6 6-4 victory over China's Wang Xiyu.