Ash Barty made light of the challenge of unseeded American Shelby Rogers with a commanding 6-3 6-4 victory to reach the quarter-finals of the Australian Open for the third year in a row.

The world number one has tried to deflect talk that she might end Australia's 43-year wait for a homegrown champion next Saturday but she looked every bit the title contender as she swept into the last eight without dropping a set.

Rogers has played quarter-finals at two Grand Slams and made a habit of upsetting highly-ranked players but she was unable to get enough of a handle on Barty's serve to make her high quality returns a factor.

Barty faltered for the first time with victory in sight, allowing Rogers to take back one of the two breaks of serve she had given up in the second set, but the top seed fixed a quarter-final date with Czech Karolina Muchova two games later.

Muchova recovered from a shaky start to defeat Belgian Elise Mertens 7-6(5) 7-5 and reach the last eight.

Mertens, seeded 18th at Melbourne Park, had defeated Muchova in straight sets at the end of last year in Ostrava in their only previous meeting and was cruising at 4-0 in the first set.

But 25th seed Muchova then found her range at Margaret Court Arena and soon got back on level terms before taking the opener in the tiebreaker.

The 24-year-old picked up the crucial break in the 11th game of the second set and converted her first match point when Mertens found the net on a return.

Jessica Pegula continued her dream run at this year's Australian Open as she sunk fifth seed Elina Svitolina to set up an all-American quarter-final against Jennifer Brady.

Pegula, the world number 61, rallied after a nervous second set to wrap up an impressive 6-4 3-6 6-3 victory to continue the best grand slam run of her career.

Next up for 26-year-old Pegula will be her former Fed Cup team-mate and last year's US Open semi-finalist Brady, who beat an injury-hampered Donna Vekic 6-1 7-5.

Pegula, who had failed to go beyond the first round in all but two of her previous eight appearances in the main draw of a grand slam, said: "I can't get more confident - it is my best result yet.

"I was a little tentative in the beginning of the second, and was able to play a couple of good games at the end of the second to get the momentum into the third. I definitely felt like I was sliding off the rails a little bit."

Pegula pressured the Svitolina serve throughout the opening set and it came as no surprise when she finally broke in the seventh game before serving out to take the advantage. 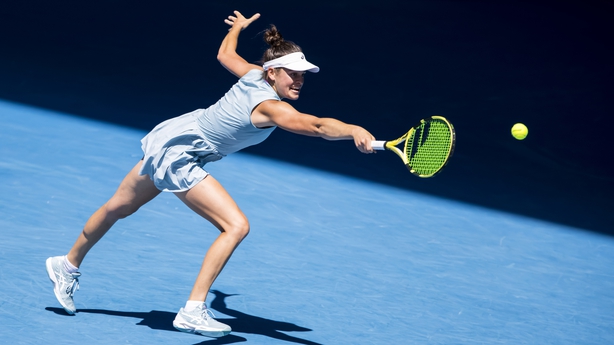 Pegula broke again at the start of the second but dramatically lost her way, a series of rash shot choices handing Svitolina an immediate break back before the experienced Russian broke again to take a 3-1 lead.

It was enough for Svitolina to see out the set but unexpectedly the momentum swung back in the underdog's favour, Pegula's more aggressive approach paying dividends in two breaks, the second of which offered up her chance to serve out for a place in the last eight.

Jennifer Brady won the first five games of her match against Vekic, who required a medical time-out early in the second for heavy strapping to be applied to her right knee.

Vekic returned and managed to haul back a break in Brady's favour, but the American secured the second break which proved enough to seal victory.