Second seed Simon Halep eased past Russian Veronika Kudermetova 6-1 6-3 to reach the fourth round of the Australian Open for the fourth straight year.

The 29-year-old was broken twice herself but pounded 21 winners past her error-prone opponent and served out reasonably comfortably for the win after an hour and 18 minutes on court.

"It's always tough to play someone who you have never played before," said Halep, a finalist at Melbourne Park in 2018 and semi-finalist last year.

"I improved a lot in my serve, I worked a lot on it in the off-season. I want to improve in every way."

Up next is a last-16 encounter with the winner of Fiona Ferro's later match against Iga Swiatek, the Polish teenager who downed Halep 6-1 6-2 at the same stage of last year's French Open on her way to her maiden Grand Slam title.

"It's a big challenge because she crushed me at the French Open," Halep said.

"I have to do something better. I'm confident, let's see." 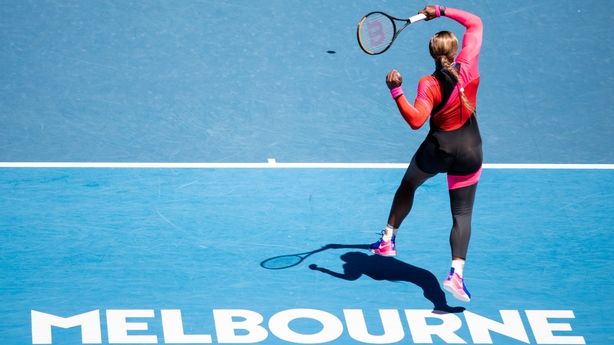 Serena Williams' quest for a 24th grand slam title continues as she too booked her place in the last 16.

The American was made to battle against Anastasia Potapova, eventually coming through 7-6 (5) 6-2 in the heat of the day.

The Russian will leave with regrets having sent down five double faults when she was serving for the first set.

Williams, who is at this stage of the tournament for the 16th time, said during her on-court interview: "It feels good to be in the fourth round and it feels good to get through that match. It is about surviving and getting through to the next round."

Williams, who will play seventh seed Aryna Sabalenka on Sunday, was disappointed that fans will not be able to attend the heavyweight fourth-round clash.

The American, a seven-time champion at the Australian Open, said: "It's rough. It's going to be a rough few days for, I think, everyone. But we'll hopefully get through it.

"But you know what? At the end of the day we have to do what's best. Hopefully it will be all right."

Even the butterflies in Australia love @naomiosaka 🦋😂#AusOpen | #AO2021 pic.twitter.com/DyJ7jLYYgh

Osaka, who is aiming for back-to-back grand slam titles having won the US Open in September, beat Ons Jabeur 6-3 6-2.

The Japanese star is on a 17-match winning streak and is a big contender for the title.

She said: "For me it was really fun. I was really nervous and scared because I didn't know whether she was going to hit her drop shot on any point so I felt kind of rushed."