An emotional Sofia Kenin battled Maddison Inglis and her own nerves to reach the second round of the Australian Open.

Kenin is the defending champion after her breakthrough triumph 12 months ago and she admitted after a scrappy 7-5 6-4 victory that she is still trying to work out how to handle the occasion.

The fourth seed said: "I have great memories. Obviously being on the court, obviously imagining everything, where everything was, I tried to put that aside.

"Maybe there were some tears. Eyes were a little bit wet during the match. Obviously it's emotional. I have to handle my emotions, let off some steam before the match. As the match went, luckily it was fine.

"Towards the end, you could see I got a little bit emotional as well. Standing at the net, 'Okay, don't cry'.

"Obviously I don't have any tricks because this is my first time experiencing this. I hope, obviously, that my emotions will somehow come down hopefully as the matches go. We'll see. I cannot promise anything."

.@SofiaKenin was feeling all the emotions as she stepped foot on Rod Laver Arena for the first time since she won the #AusOpen last year ❤️🏆#AO2021 pic.twitter.com/GttutyagGN

Not since 2003, when Jennifer Capriati was beaten by Marlene Weingartner, has a women's defending champion lost in the first round at Melbourne Park.

That never really looked on the cards but Kenin trailed 3-1 to Australian wild card Inglis, who is yet to win a tour-level match, in the first set and, although she steadied herself thereafter, she never fully settled into the match.

"I was obviously quite annoyed the whole match," said Kenin. "I felt like the first two points I started off well, then wasn't able to close out the first game.

Meanwhile, Briton Johanna Konta retired from her first-round match against Kaja Juvan of Slovenia on Tuesday due to injury while leading 6-4 0-2.

Konta, seeded 13th at Melbourne Park, left the court for a medical timeout to get treatment on her abdomen when serving at 5-4 in the opening set.

She came back to serve out the set but continued to struggle and lost the first two games of the second set before deciding she was unable to continue. 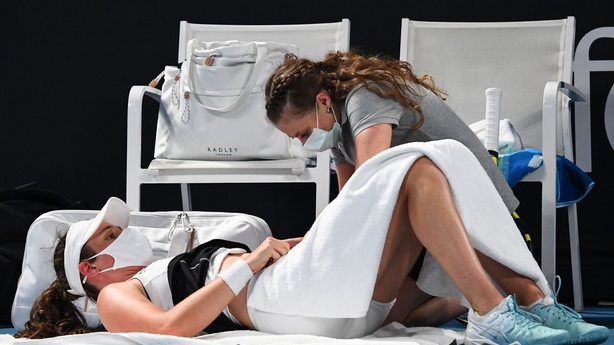 Garbine Muguruza, who lost to Kenin in the final last year, was a comfortable 6-4 6-0 winner over Margarita Gasparyan while 11th seed Belinda Bencic and former semi-finalist Elise Mertens are also through.

Badosa endured 21 days in hard quarantine after contracting coronavirus and made no secret of how difficult she found the experience.

She was in sight of the considerable consolation of a first-round victory when she served for the match in the deciding set only for Samsonova to claim the last three games.

It's a real honour and privilege to watch you compete @ashbarty 🙏 #AO2021 | #AusOpen pic.twitter.com/SUleXszHo9

World number one Ash Barty doled out the dreaded 'double bagel' to Danka Kovinic in the first round of the Australian Open on Tuesday, humiliating the error-prone Montenegrin 6-0 6-0 on Rod Laver Arena.

Barty, looking to become the first homegrown champion at the Grand Slam since 1978, won the first 16 points of the one-sided contest and never looked back, wrapping up the win in 44 minutes.

"This is what it's all about, this is incredible," the Australian said to cheers from the crowd.

"It's impossible not to enjoy a night session on this beautiful court."

Next up for Barty is a second-round match against Spain's Sara Sorribes Tormo or local wildcard Daria Gavrilova.